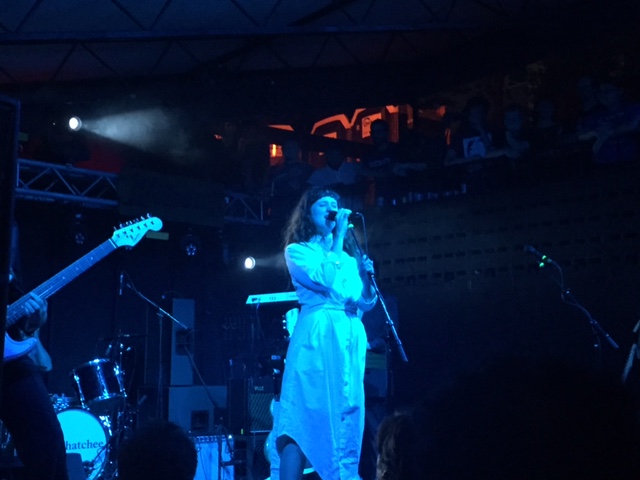 When the light hit Katie Crutchfield right, she looked like an apparition. And that fits well enough for Crutchfield, now touring her fourth album as Waxahatchee. A white outfit plus the occasional white light made for a glowing, ghostly indie rocker during Waxahatchee’s August 5 show at the Mohawk, which showcased both the riffing, moody rock Crutchfield’s sound has grown into and the continued development of her quieter acoustic side that represents her recorded roots.

Maybe a bit of an ethereal, come-to-the-light image is what Crutchfield is shooting for these days, given the black-and-white cover of her new album, Out in the Storm, where her hair is falling frizzily across her weary face, blocking her eyes. At any rate, even when the lights didn’t cast Crutchfield as a glowing 1883 murder victim haunting a creepy mansion, Waxahatchee still delivered a solid, if unspectacular, one-hour performance, battling through uncomfortable heat and humidity that persisted all the way to their midnight-ish end time.

Known mainly as part of a revival kick of ‘90s-sounding indie rock that includes bands like Massachusetts’ Speedy Ortiz, Crutchfield’s work earns that categorization. But she’s also developed a distinct, soul-baring voice as a songwriter, can craft a memorable melody, and adds sonic touches to many of her songs that take her beyond a mere worshipper of 1995-era college radio.

For those who came because they wanted to hear some searing rock, there was plenty of three-guitar action – including Katie, solo-artist sister Allison, and Sleater-Kinney touring guitarist Katie Harkins – and the likes of the ripping “Peace and Quiet” off 2013’s Cerulean Salt. But the crew showed they knew the dynamics of a set list, ably mixing the rockers with quiet ballads that not only varied the pace but intensified the impact of the sonically edgier stuff. (Their set held the eyes of everyone except for a larger-than-normal number of couples making out during their set. Waxahatchee’s music is a lot of things, but it’s not makeout music. Maybe it was the heat or something; it was certainly a little much for Allison, who ditched her jacket early on.)

On those slower acoustic numbers – like “A Little More” or “Sparks Fly,” two songs from the new album exploring relationships and suppressed feelings — Crutchfield showed how her softer side has developed from minimalist beginnings five years ago. Waxahatchee’s first album, 2012’s American Weekend, was literally just Crutchfield recording in a bedroom with a guitar, a record of lo-fi, echo-y and hypnotic songs that hinted at what she could do with some technological help and a clearer, beefier sound. She’s added exactly those elements, but her balladry sounds like it’s in the big leagues now, and it shows.

That all said, judging by this one performance, Waxahatchee at this point is better appreciated on record. That has less to do with any shortcomings of the band as a live act, and more to do with the fact that Crutchfield has established herself as a reliable songwriter who puts together consistently strong studio work. The songs of Out in the Storm, both the muscular and the quiet ones, lend themselves to live performance and suggest Waxahatchee have it in them to become a spine-chilling stage act. The Crutchfields and co. aren’t there yet, but they’re still worth a live watch.