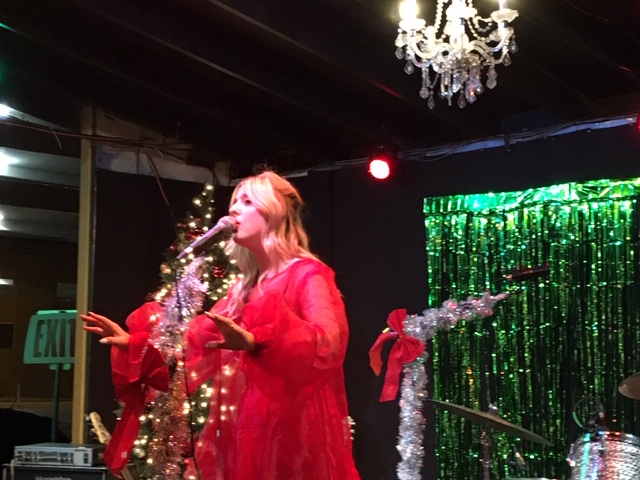 When that happens, and the topics of intended Ear Traffic posts form a backlog, it’s time to hit a few of them in one post. In this case, it feels naggingly necessary to get myself caught up before I spend a few entries on year-end lists. So, starting with the most recent event, here’s the latest edition of that periodic music-in-brief cluster I call Traffic Jam.

Molly Burch Christmas show @ Scholz Garten, Friday
Molly Burch might’ve been the most well-equipped of any of Austin’s current crop of young singer-songwriters to release a full Christmas album. Her voice is both beautiful and, at times, a touch stylistically off-center. It was a good bet that a yuletide album from her would be both pleasant (goal No. 1 of any Christmas album) and wield a gently sanded edge to avoid the sterile polish that dampens many holiday recordings.

With the release of the The Molly Burch Christmas Album in November and Friday night’s full performance of the record at Scholz Garten, she’s made good on all the promise the words “Molly Burch Christmas” carried with them. Friday’s cool night was perfect for an Austin holiday show, and a sold-out crowd saw Burch (top photo), clad in festive all-red, deploy every vocal tool in her belt as she glided through the album’s mix of staples (“I’ll Be Home for Christmas”), not-as-ubiquitous covers (Dolly Parton’s “Hard Candy Christmas”), and two originals.

Those new ones, the quintessentially Burchian gentle surf rock of “Holiday Dreaming” and the songbird balladry of “Happy New Year,” were among the best moments of Friday’s set, with the former showcasing the soft-billowing smoke in her lower register and the latter a high-soaring ode to a holiday that doesn’t have many songs dedicated solely to it. A sweet-and-loungy “I’ll Be Home for Christmas” and the Mamas and the Papas’ “Snowqueen of Texas” provided other highlights, and Burch closed the Xmas-album portion, appropriately, with “Auld Lang Syne” (“Sing if you know the words,” she urged, but of course a quick glance around the crowd suggested what we all know in our hearts: Virtually nobody knows all the words to “Auld Lang Syne.”) Then, she finished off the set with a few of her own non-holiday staples, including the title track off her last album, 2018’s First Flower.

Not that I expect such a thing, but if a Molly Burch Christmas show becomes an annual event, I’m inclined to make it each time. Her cheerful infectiousness, agile pipes and subtly unique take on the music of society’s definitive holiday are ripe to put Austin in the spirit every time.

The Black Pumas: Grammy nominees. That was fast.
The internet tells me pumas can run up to 50 mph. After the past year, that sounds about right.

My aforementioned year-end posts won’t include an Austin Artist of the Year. But, without the fanfare of an official designation, I’ll just go ahead say Austin’s 2019 Artist of the Year is the Black Pumas. Honestly, who else would it be?

The Grammy nomination they received in November for Best New Artist was just the latest floor Eric Burton and Adrian Quesada have hit on this express elevator they’re riding, but it was also the most staggering. It was surprising enough in October when they showed up performing “Colors” on “Jimmy Kimmel Live.” Sure the band’s Instagram has been flooding itself all year with sellout notices and low-ticket alerts wherever they’re touring, including overseas. And today’s late night hosts generally do a credible job of giving under-the-radar artists performance slots. But I had no idea network late-night would take notice this soon.

Then came the Grammy nod, and … wait, what? This band consisting of longtime Austin music veteran Quesada and a fairly recent transplant/former busker in Burton, which didn’t exist three years ago, isn’t just ours anymore? They’re the world’s now?

Set aside the fact that the Grammys are a long-standing punching bag, and often deservedly so. And that Quesada’s already won a Grammy before as part of Grupo Fantasma. As well as the fact that the Pumas almost certainly aren’t going to pull an Esperanza Spalding-type upset and win; they’re up against Billie Eilish and Lizzo and Maggie Rogers and (sigh) Lil Nas X.

But for a band that came together in 2017 in good ol’ organic Austin-musician fashion, this feels like a land speed record for national recognition. Cheers to the Pumas for living up to their name and representing, on a national stage, this town’s gift for birthing fresh-sounding retro.

Torino Black@ One-2-One Bar, Nov. 21
I was at One-2-One Bar on this night for Eric Tessmer, who was performing for the Xumo TV streaming show Austin Music Live. I came away as a new fan of Torino Black.

Don’t get me wrong — Tessmer, he of the hard-bitten rocker presentation and blazing, elegant blues-rock axework, was good once again. And I came away with his guitar string after he flung it into the crowd at the end of the night (a first witnessing of that for me, incidentally). I’ve now seen Tessmer three times this year, though, and written extensively about him before. So instead, I’ll shift focus to openers Torino Black, who played a satisfying full set that went well beyond a “warmup” designation.

Rip-roaring classic hard rock can be either gratifying or gratingly derivative (perhaps a little of both at the same time). TB are stone-cold live winners for anyone who loves ’70s radio rock’s sharpest side, occasionally throwing in a touch of Latin flair. They cruised through an hour of head-bopping rockers, with a few acoustic tunes in the middle showcasing Venezuelan frontwoman Sisi Berry’s sweeter side, like “Working Man,” a ballad dedicated to those who “bust their ass” in the everyday grind. The rest of the time, they were nearly direct Zeppelin descendants, featuring Saul Arteta’s cleanly distorted car-radio riffs and Berry’s high-flying voice that sometimes sounds like early Ann Wilson on steroids, as well as her arm-swinging, posture-free showwomanship. 2017 rocker “Oh” and set closer “Mama” — the latter off this year’s EP, Calle Alta — were both highlights and offer a tasty streaming sampler of what Torino Black is all about. Rock ‘n’ roll, as it’s traditionally perceived, won’t die as long as there are always talented voices stepping up to write and perform good new rock ‘n’ roll songs. Berry, Arteta, and Torino Black help fill a traditional niche with freshness and invigorating energy.