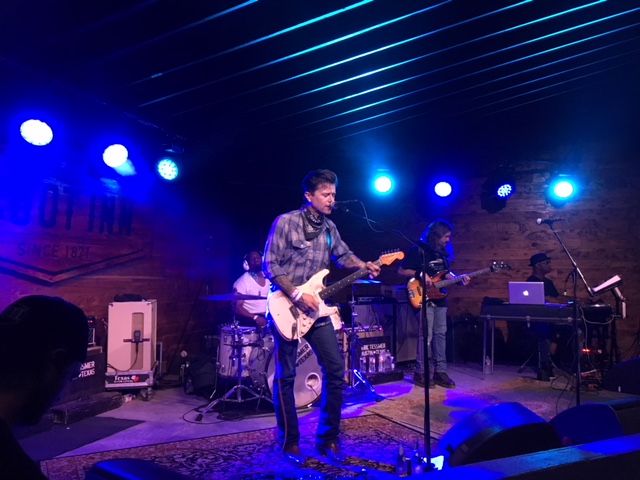 Two moments from Eric Tessmer may define his music to date better than anything else. Or at least, they’re moments I’ve witnessed that I’d consider to be Tessmer in a nutshell. One is on record; the other came during the Eric Tessmer Band’s EP release show last Friday night at the Scoot Inn.

The first one I’m referring to originally came in 2018, but kicks off his brand new second EP, titled — wait for it — EP 2. The opening track, and perhaps Tessmer’s trademark song to date, “Good So Bad,” begins with the song’s creeping guitar lick breaking through the unmistakable, classic sound of record hiss.

Second, when Tessmer came out for his encore on Friday night, someone near the stage spoke up and asked the question that had been on my mind and my wife’s mind before Tessmer even started playing: What’s with the big bag of ice sitting on his gear?

Good question, Tessmer acknowledged. He then explained to the crowd, “I have old fuzz pedals with germanium transistors in them. And when they get hot, they just stop working.”

It’d be fun to be disingenuous and pretend I’m an electronics expert who didn’t need the internet to further elaborate on this, but I won’t. An article on GuitarPlayer.com tells us all we need to know: Germanium “was used to make transistors, diodes, and other components that were widely used in consumer electronics until more consistent and more reliable silicon components became available in the late 1960s. As far as solid-state circuitry goes, they are the ‘old technology,’ and have developed a reputation for a decidedly vintage mojo that remains in vogue today.”

So, there’s Eric Tessmer for you: A blues-rock guitarist with a seemingly Jack White-like dedication to deploying and preserving the coolest elements of music’s past, whether it be record hiss or vintage fuzz pedals. Needless to say, there’s a willing audience in Austin for that kind of thing, including the guy churning out these words right here, who’s writing on a laptop with a sticker that says “Vinyl isn’t Dead.”

That dedication informs Tessmer as a live performer, and a large crowd at Scoot Inn got two hours of music that featured both snarling blues-rock riffage echoing the best of Gary Clark, Jr. and more lurching instrumental jams.

Another fine nod to the past came with the band’s opener, a cover of Jimi Hendrix’s “Are You Experienced?” From there, Tessmer’s guitar and songs were the unquestioned star, although his band were able costars — drummer Marc Redix, bassist Jason Rathman and keyboardist David Grant, Jr., whose organ tones added particular bluesy and soulful color. They mixed sharp toe-tappers with head-bobbing midtempo songs like the older “Ms. Fortune Teller” or the slow and extended “Love Is Taking Its Toll” off the new EP. Tessmer brought in some fine guest stars, too, in Texas guitar legend Alan Haynes and Angela Petrelli of the L.A. band Roses and Cigarettes, the latter joining in during the introspective “Good So Bad.”

Like many a bluesman, Tessmer likes to draw out instrumental breaks, and there were a few occasions when the jamming seemed more meandering than hypnotic. But overall, his show Friday was an overwhelming winner. It showed he’s a skilled, passionate exponent of blues rock in its purest form, and someone whose stage work bleeds both appreciation for rootsy blues and a no-nonsense approach to keeping it alive.