After seeing James McMurtry perform live for the first time, I came away wondering if there’s ever been a better time to see him than right now.

Politically inclined entertainers – whether we’re talking obnoxious pundits, late-night talk show hosts or musicians with a political bent – thrive when their side isn’t in power, right? The staunchly liberal McMurtry has seen some of the greatest success of his 30-plus-year recording career come during its second half, during the tenures of two thoroughly unpopular Republican presidents, including this one. To the like-minded, his peeved, sharp-edged Americana — pessimistic, disgruntled, bleak – could hardly be more appropriate for any other age.

At his July 31 acoustic performance at the Continental Club Gallery, the nearly-old-man Texas liberal (OK, he’s not even retirement age yet) showed he carries a hypnotic live folk stature that matches that mood.

As he sings, McMurtry’s face sits somewhere between a grimace and a scowl. His mouth barely opens, ejecting the lightly twanged words with a seemingly uncomfortable disdain, as he spins 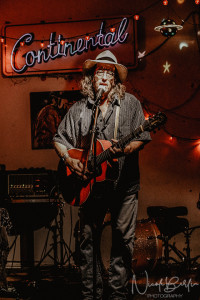 But fortunately, his set wasn’t all grit and gloom. McMurtry balances his pessimism with the most sardonic of light touches onstage. He also made room for some uptempo stuff, throwing in the rambling Southern rock of one of his “Choctaw Bingo,” one of his best-known numbers. His gift for acidic humor is about as strong as his gift for painting dystopian bleakness, as displayed in songs like “State of the Union” (featuring, for example, a brother who doesn’t like blacks, Hispanics or alternate views, and will “tell you it’s tough to be white”) and “Red Dress” (“Yes I’m drunk, but damn you’re ugly/Tell you one thing yes I will/Tomorrow morning I’ll be sober/You’ll be just as ugly still.”) Shifting between guitars, he demonstrated a particular talent for wringing out the pleasing jangle of a 12-string.

Politically, McMurtry didn’t saturate his show with a bunch of spoken social-comment interludes. Most of his between-song musings stayed out of the political as he let his most biting songs speak for themselves. The one major exception: His introduction to “Copper Canteen,” the song that, as he noted, landed him “a profile in the Failing New York Times about a year and a half ago. Which makes me an active part of the fake news industry – which is what we in this country used to call a free press.”

The 30-some-odd people in the Gallery applauded, and maybe there was more to that moment than just an obligatory cheer. McMurtry, despite having collected some modest fame, may be one of Austin’s stealthiest voices of the #Resistance each week at the Continental. “State of the Union,” released as a single last December, may be the strongest evidence that in his mid-50s, McMurtry hasn’t lost his observational eye, his creativity, or his edge. If you’re someone who’s disheartened by what’s going on all over the nation and the world right now, James McMurtry is here to commiserate with you, and give live voice to what you’re feeling.