One of Austin’s quirkiest and most intriguing solo artists, Walker Lukens really seems to love sounds. He loves creating them, and he loves mashing them together and molding them into something reminiscent of his diverse influences, but not quite like anything they ever did.

Spoon’s Jim Eno has proven to be a perfect studio mashing partner for Lukens’ melting pot of rock, synths, electronics, and soul-inflected vocals. He once again produces Lukens on Adult, and this time, the results are sonically more jagged and clattery than ever before, with less of a guitar-rock influence and even more of a programming-and-synth-heavy soul bent. But that’s not a bad thing, most of the time. Lukens echoes influences both contemporary and classic, with my ear detecting a little bit of everything from Phantogram-ish electronica to occasional peak-’80s Peter Gabriel vocal stylings. 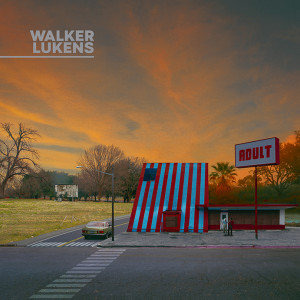 If you glanced at some of the song titles and listened closely to the lyrics off Adult — such as “I’ll Take the Dog” and the previously released “Heard You Bought a House” and “Didn’t Wanna Do Right” — you might assume this is a concept album about “adulting” (a manufactured, uinimaginative fake verb that I hate, although that’s a diatribe for another time). It’s not, really, although there are variations on that theme.

Despite that the sharp guitar punch that was more in evidence on much of Lukens’ 2017 album, Tell It to the Judge, is largely absent here, album opener “Tear It Out My Heart” might give you the best combination of rock and danceable bang on the album. “We See U” is musically reminiscent of Canadian smooth-electronic duo Bob Moses’ best efforts. With Lukens singing powerfully while playing off female backing vocals, it sounds like a charged callout of someone exposed as the person they don’t want everyone to know they are: “Maybe we got that memo wrong/Maybe we got it all right … We don’t see you like you do/We see you/We don’t see you like you want us to.”

One of the few moments that doesn’t quite work among these nine tracks is “U2me2,” which features a jumble of

electronic and vocal elements that don’t sound fully fleshed out. And occasionally, Adult features some unfocused, unimpressive instrumental meandering. But Lukens finishes the album up with a couple of strong tunes, with “Didn’t Wanna Do Right” and “Baby” hitting some traditional soulful synth-pop notes; “Baby” closes the album on an amusing call for shaking up adult life “‘stead of growing old in the corner.”

“Love doesn’t die/It only changes form,” Lukens romantically sings on “I’ll Take the Dog,” and if you need a real succinct explanation of what Lukens is all about, that second line might do it. He’s changing form all the time from song to song, whether it be a little or a lot. On Adult, his explorations and shape-shifting once again yield plenty to enjoy.