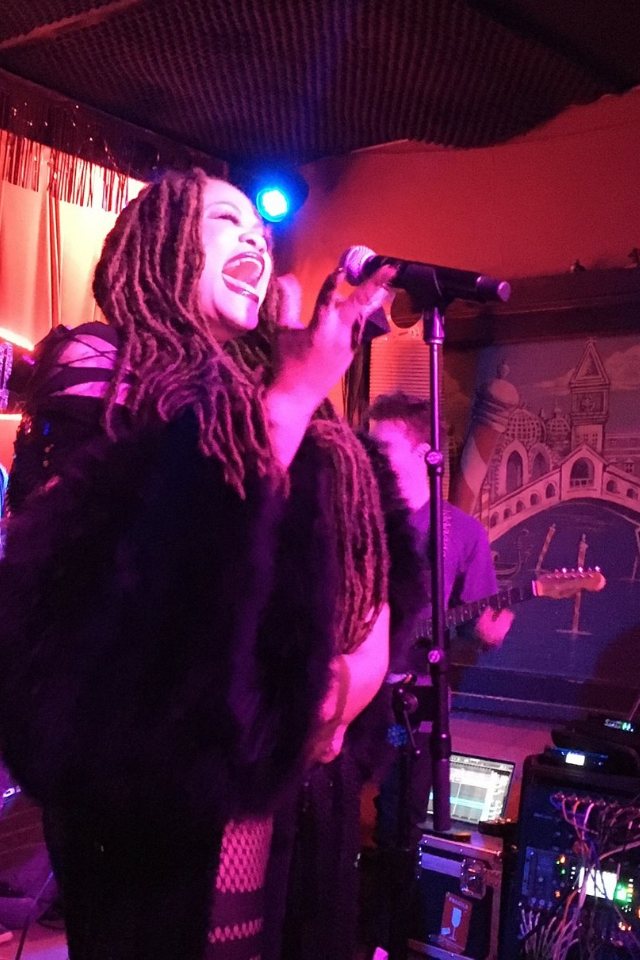 It was loud and raucous enough inside the sold-out Continental Club for what was billed as Tameca Jones’ final Austin show that I can’t say with 100% certainty that she didn’t explicitly say goodbye in some way. But 1) if she did, I didn’t catch it, and 2) at any rate, it was clear that Jones’ goodbye gift to hundreds of fans on Nov. 19 wasn’t any spoken words, but her music — the 2021 iteration that she hopes will find support and traction when she moves to Los Angeles.

Tameca did occasionally acknowledge the repeated pleas of “Don’t leave us!” during the Nov. 20 set, but never in any elaborate way. There was a call toward the end to support the local artists you love, an implicit-approaching-explicit reference to the stated reasons she’s leaving Austin after 15 years for a “less affordable and more crowded” metro.

But almost exclusively, her goodbye was her set. Playing a drumless, programming-beated song slate very similar or identical to the one she played over 4th of July weekend at the Far Out Lounge, Tameca left no doubt who she is now, and what she’ll likely try to be in La La Land: a pop/R&B-shifting singer with a heavy soul underpinning. Whether in originals like last year’s “IDK” or the more recent “All Out,” or the covers of “Sweet Dreams” or “I Can’t Stand the Rain” that are instantly recognizable to any longtime live Tameca tracker, Jones is taking a gradually developed new version of herself out of state: smoother, more polished, less of a traditional or throwback soul Empress than she’s been for most of her intensely memorable Austin career.

As usual, she sang flawlessly and with throbbing power. Not as usual, she seemed just a little uncomfortable at times, seemingly laughing nervously at some of the adoring reactions to her performances. When she returned for an encore, I figured she’d probably offer something elaborate to sign off. Maybe it was cool that she didn’t. Perhaps she wasn’t feeling it, and perhaps there aren’t any wrong answers, particularly when social media now means there never really has to be a final goodbye. At any rate, that parting gift in a venerable, jam-packed venue will do just fine. When it comes to live soulifying, it’ll be awhile before Austin is home to anyone like her again.

Memo to year-end listers: Now, the year is over
Ahead of my annual best of the year lists, a quick public service announcement that I believe will resonate deeply with year-end music list nerds, such as myself:

When my Spotify Wrapped dropped at the beginning of December, I didn’t look at it. I still haven’t. Frankly, I’ve got a real problem with year-end best-ofs that drop in early December, as if the year is only 11 months long. That goes for Spotify, and Pitchfork, and anyone else who announces their top picks for the year before December has even left the maternity ward.

Now, I understand the rush. In theory, the market for year-end interest, clicks, what have you, is at its height sometime in December, and probably dries up when people turn the page to the next year, so you want it out there when the appetite is high. And arguably, when music gets released this late in the calendar year, its impact is most likely to be felt in 2022 anyway.

Just the same, as a serious annual list-maker, I believe striking a balance between these factors is imperative — a moral imperative, goddammit. So, here at Ear Traffic, we’re splitting the difference: A release date of Dec. 15 is the cutoff date for year-end consideration. It’s gotta be out there somewhere in the world before that date. Otherwise, it gets bumped into the 2022 basket.