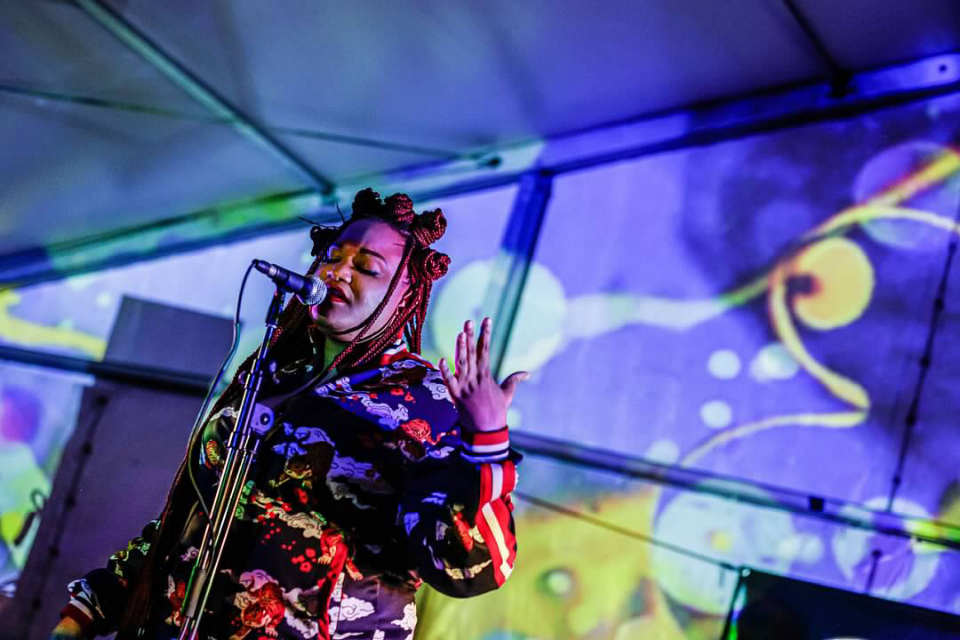 A South Austin kind of show, is what it was. The sprawling Far Out Lounge patio, where you could fit roughly four to five structures the size of the physical establishment, was oozing with the diverse and off-center character flavors people still associate with this side of town, even as Austin’s weirdness seems to slowly erode elsewhere. The July 3 launch show for the concert app Mic Check had an eclectic all-afternoon-and-evening lineup of bands, and earthiness perhaps best epitomized by Far Out’s teal, plastic faux-button-back patio chairs, where you might chill for 15 or 20 minutes before realizing you’re sharing the seat with a cigarette butt.

It was a show for everyone, and it showed. But we were there that evening primarily for Tameca Jones and our fourth-ever glimpse at Austin’s Empress of Soul, but the first since 2018. In the continuing push to normalize being in crowds listening to music again, it seems to help some to return to some of the city’s tried-and-true live masters, the old shoes you know are going to give you your money’s worth. (In this case, our money’s worth was zero, because admission was free with a download of Mic Check, but you know what I mean.) Tameca didn’t disappoint; she never does.

It was warm (uh, doi) on day one of the three-day Fourth of July weekend, so Jones had to have been a little toasty in her dark blue jumpsuit featuring tigers on top of clouds, with red and white stripes. (“This is the only thing I had in red, white and blue, so I was like ‘Let me rock this shit,'” she explained at one point.) She opened with a percolating “IDK,” the effective, sexy pop single from last year that represented her effort to take a grander step beyond being the local Empress of Soul. Its bubbling R&Bish rumble was a strong start  for a 45-minute mix of new and new-ish material, along with her patented emotionally bleeding covers.

Working that controlled, never-cartoonish smooth sizzle of a voice, swaying and throwing in some “rollin’ with the homies” hands, Jones and her musical backers had everything working. She’s always been a gifted cover artist, with an ability to make a billion-times-played pop standard her own, and gave her usual evocative twist on “Sweet Dreams” atop programming and pulsating bass. I’ve heard her give “Sweet Dreams” the Tameca Treatment before, but a much bigger surprise was a tasty version of Tame Impala’s synth-riffy “New Person, Same Old Mistakes.” She performed more of her original material just as passionately and impressively, whether it be the bad-relationship lament of “All Out” (of fucks to give, that is), or “Paint the Roses,” a closer inspired by last year’s violence against black Americans. (“All the bullshit!” someone in the crowd shouted, to agreement.)

Even as Tameca bends her music into subtle new shapes, or perhaps continues to tackle topics with more edge or social relevance, there’s always a sense of reliability to her performances. While that reliability fits into any night you’re in the mood for soul/R&B/pop goodness, it’s especially welcome right now. You know she’ll get onstage and sing not only with tremendous skill, but with an open heart. If there’s ever any doubt that Austin’s stages will never be the same after what we’ve been through, performers like Tameca help to push back against it.