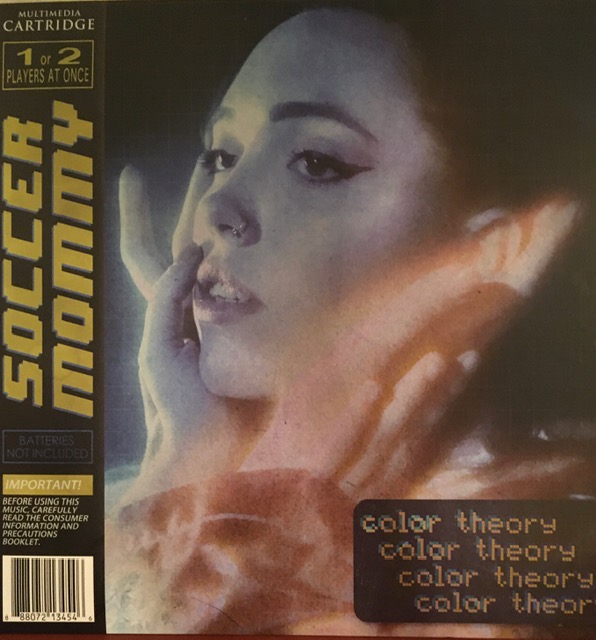 I could write a bloated, unnecessary intro about how I’ve been feeling for the past four to five weeks or so, but I’d rather just jump into some reviews of recently released records.

It is worth noting that music — new, old and middle-aged — is about the best way to persevere through this pandemic. I’ve found it more therapeutic than any delightfully appalling segment of “Tiger King,” better than working out with limited equipment, superior to identifying today’s winner of the World Corona Meme Championship. A bad record is almost always superior to a bad TV show or a bad movie. And with music, the highs are higher.

That’s all I got for a preamble. Here are my reviews of four recent albums, using my usual five-star scale, and I’ll likely have some more reviews for you before too long. My hope is to check in on some local releases soon:

Soccer Mommy, Color Theory
Sophie Allison is really good at extracting her feelings — the nagging negative ones, mostly — and converting them into soul-searching, psychologically haunted poetry. And that in a nutshell, really, is Color Theory, the second proper full-length from the Nashville indie darling, known as Soccer Mommy, who’s a month shy of her 23rd birthday.

In instance after instance of self-doubt, uncertainty, and depression, you can almost picture Allison on the couch, telling a therapist how and why life doesn’t and never will feel quite right. But she does it with such a preternatural handle on similes, imagery and the exact most powerful way to word it that even the therapist can’t help but marvel. Color Theory starts out with an outstanding 1-2-3 punch of “bloodstream,” “circle the drain” and “royal screw up” and levels off into a comfortably uncomfortable groove of dreamy melodies and dark, midtempo-to-slow examinations of headspaces, relationships that don’t work, and certain future unfulfillment.

Once you’ve finished the record, opener “bloodstream” appears almost like an executive summary of a report, an overview of everything that follows. There’s blood going from knuckles to sink, a “halfhearted calm — the way I’ve felt since I was 13,” and acknowledging that “it’s waiting there swimming through my bloodstream/and it’s gonna come for me.” Quickly, questions and doubters emerge: “What did you have that I didn’t/And why am I so blue?/Someone’s talking in my forehead that says I’ll never be like you.” “circle the drain” is depression set to excruciating but marvelous detail: “And I think there’s a mold in my brain/spreading down all the way/through my heart and my body/’cause I cling to the dark of my room/and the days thin me out/or just burn me straight through.”

Ominous strumming and detached drums and drum programming contribute mightily to Color Theory’s indie darkness, with Allison’s voice often adding just enough balancing melodic sweetening. If there’s something that easily separates this very good album from being a great one, it’s maybe just a bit more thematical variety. Not every song is perfect; the relative epic “yellow is the color of her eyes” features more great poetic pessimism (“Loving you isn’t enough/you’ll still be deep in the ground when it’s done”) but slightly wears out its swirly welcome over seven minutes. Color Theory is essentially a one-mood album, albeit coming at that mood from many varied angles. Those angles are worth repeat exploration because Allison’s word power is dazzling, an often-beautiful channel to places that aren’t fun to go. — 3 1/2 stars out of 5

Waxahatchee, Saint Cloud
I’ve always loved Katie Crutchfield’s first record as Waxahatchee, the home-recorded and utterly lo-fi American Weekend, a hypnotically quiet guitar-and-voice album that practically transported you into the darkest cabin in the woods. So maybe Saint Cloud’s move into full-band, full-throated Americana — instead of the ’90s-influenced indie rock Crutchfield has become known for since Waxahatchee’s second album — shouldn’t have been such a surprise.

But for me, it was. And is it ever a great surprise. For the majority of Saint Cloud, Crutchfield adopts Lucinda Williams-indebted sonics and vocal twang, and it’s almost shocking how natural the fit is. If you casually know Waxahatchee, chances are your familiarity rests with songs like “Peace and Quiet” or “Silver,” moody college-rock-type tracks. But here, the Alabama native Crutchfield sounds like she was born for easy-moving country-rock. And her songwriting is searching and sharp.

“Can’t Do Much” is a tortured, Lucind-y love song of sorts, with Crutchfield’s considerable word power putting a poetic spin on the side effects of longing “My eyes roll around like dice on the felt/My mind turns to something useless and trite/My uneasiness, materialized”) and putting yourself in the other person’s head (“When you’re missing me, oh, what do you see?/Something wild that you think you’ll never be?/Something safe that you could tend to and leave?/Something versatile to fill all your needs?”) “Fire” is chill but striking down-home soul that Crutchfield described as a “personal pep talk”; she introspectively describes herself as “wiser and slow and attuned,” and says she’s “a bird in the trees” who “can learn to see with a partial view.” That may be, but the view she enjoys on the entirety of Saint Cloud is as good as any indie songwriter has right now. There isn’t a weak song on here, and it’s my favorite album of 2020 so far. — 4 stars out of 5

The Strokes, The New Abnormal
I informally, loosely have what I call the 20-Year Rule: Most rock artists I like have a window of 20 years from the start of their career in which to completely hold my interest in what they will put out next. It’s just hard for rock bands to maintain that same fire, that same singular creative voice and desire to explore and incorporate new wrinkles in their sound.

Would you feel old if I told you the Strokes are now pushing that window? Yes, somehow, the amazing Is This It came out 19 years ago this July. It’s been a long time — probably 2011’s mostly OK, sporadically great Angles — since anybody truly anticipated their next full-length. Julian Casablancas is doing other stuff. Albert Hammond, Jr.’s doing other stuff. The New Abnormal — about as great an accidental title for the times as one can imagine — is their first full-length in seven years. No one looks to the Strokes in hopes of the next great rock record anymore. And yet, they’re within the 20-year window, and Is This It and Room on Fire were both key pieces of the soundtrack to my college years. So here I am, seeing what they’ve got left. Not like I’ve got much left … to do.

Disappointingly, the answer to what they’ve got left is “a little, but not much.” Remember that “same fire” I mentioned? There’s precious little of it here. One thing the Strokes should never do is plod, and yet, they do it again and again on New Abnormal. Fun fact: The Strokes’ five previous studio albums never had a single track top five minutes. Not one, which probably isn’t too surprising. Here, out of nine tracks, they do it five times. Not that all those songs are bad; album opener “The Adults Are Talking” is good subdued-garage stuff and really ends around 4:42 before outro’ing with studio banter. But it’s just indicative of where they are now — seemingly drifting, often boring, and lacking a musical identity.

“Bad Decisions,” an easy choice for a single because of its resemblance to the classic Strokes sound, calls in songwriting assistance from Billy Idol’s “Dancing With Myself” (yep, he’s credited) and comes out well on the other side, also reminding me a little of the Strokes teaming up with Modern English. Beyond it and “The Adults Are Talking,” I struggle to recommend much else here. “Brooklyn Bridge to Chorus” is an agreeable throwback, both in sound and moody lyric, to the band’s glory days … if you can ignore the cheesy, intrusive synths. Unfortunately, you really can’t.

There’s only so much I can take of the Casablancas falsetto, most famously heard on Daft Punk’s hit “Instant Crush.” Here, it takes an unfortunate star turn on the likes of the lyrically puzzling “Selfless” and the six-minute “Eternal Summer.” The latter suffers from a tonal schizophrenia, with Casablancas augmenting his falsetto with some unseemly shouting — not the cool, “Take It Or Leave It” kinda shouting. “At The Door” is another long and winding track that starts out with some inviting atmospherics but is likely to leave you checking your phone two-thirds of the way through. “Why Are Sundays So Depressing” teases with a little bit of “You Only Live Once” catchiness, but turns out to be a mishmash of disjointed ideas with a weak chorus. By the next time the Strokes release an album, they’ll likely be out of my 20-year window. Great as they were in the early 2000s, I’m guessing I won’t be granting them an extension.— 2 1/2 stars out of 5

Mosses, T.V. Sun
Let’s save the weirdest for last. Normally, I don’t have a lot of use for the likes of T.V. Sun, my personal introduction to Mosses. But somehow, this instrumental-driven, out-there hodgepodge of psychedelia, electronics, and chant-y communal folk reached me well enough to earn repeat listens and a decent rating. I’m 90% sure it has to do with the weirdness of the now. These are strange times, and if you want an album to match those times while still managing to stay accessible, T.V. Sun should do it for you. It’s top-notch for zoning out and pretending you’re on drugs.

Mosses are basically Ryan Jewell, a New York multi-instrumentalist who’s been part of a zillion not-so-famous projects, and Danette Bordenkircher, with some help. What they’ve got here are imaginative, intergalactic, noisy pieces that are sometimes fully formed songs, and sometimes just come across as calculated programming dumps. Somehow, even for someone like me who prioritizes focus over drift, it works more often than not.

Of course, the most structured, fully formed parts are my favorite. The towering home run here is “Time in Yer Mind,” a driving psych-rocker straight out of 1968 or so with an insistent beat, a chant-and-organ chorus and an outro into “Tomorrow Never Knows”/”Frankenstein”-style loopy noise. “MSR,” another highlight, is guitar pop that sounds kinda like the Shins possessed by Satan; there’s just enough of Jewell’s droney singing to give you a vague sense that this is a conventional pop song. “Tall Bearded Iris Speckled,” the opener, is an organ-drenched flower-power type deal that’s sufficiently far-out, man, without hammering itself into the ground. Title track “T.V. Sun” gets a little funky with some subtle underlying buzz. On the other hand, the blippy and bloopy “You Can’t Fall Off a Mountain” is an overlong misstep, an uncompelling batch of dry ingredients that includes 3 cups of high-pitched programming, a dash of chanting and some hippie-dippie flute that might be the best part of the thing, but comes too little, too late.

If you want something more than a little offbeat, and much more than a little challenging, give this a shot. There are moments when T.V. Sun will lose you, but it should also grab you some, too. At worst, this is high-end background music. At its best, T.V. Sun is a whole lot more. — 3 stars out of 5