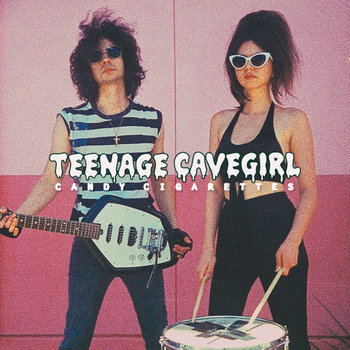 Am I about to overrate this record based on personal taste? Possibly. Some music reviewers probably feel a need to account for their own biases, to “normalize” their evaluations and ratings of albums for their perception of how a consensus or zeitgeist (gag me) should perceive them.

So, for example — just hypothetically — they might actually enjoy the hell out of Austin duo Teenage Cavegirl’s debut album and yet feel compelled to downgrade it a bit. After all, it doesn’t break new ground, change the world, elevate its form, or do whatever records are supposed to do these days to earn a lofty rating.

I won’t do that. My blog, my tastes, my circus, my monkeys. And I’m an easy mark for fast, sharp-edged and (especially) melodic garage-punk of a vintage-y bent. That’s what Teenage Cavegirl sets out to give you on the 10 songs on Candy Cigarettes, and they succeed extraordinarily well at it.

Lead singer/standup drummer L.A. and guitarist Andy Ray call their sound “trash-pop bop,” and that fits. The fuzzes, buzzes and rumbles out of Ray’s instrument embody everything the best garage rock has been about for 55 years, and L.A.’s assertive, late-’60s-go-go-reminiscent delivery make for a near-perfect track-meet debut (every song is under three minutes, and half of them are under two).

Primitive, stomping and lo-fi, “Space Girl,” “They’re Gonna Get Ya,” “No Good//So Bad,” and “Area 54” are all stone-cold bullseyes. Ray’s only lead vocal appearance, the closing cover of Holland-Dozier-Holland’s “Leaving Here” (stylized as “Leavin’ Here),” adds some variety with both his distant vocal and a touch of a psychobilly element as surf-rock drums pound away.

Ultimately, this is all high-end, trashy garage fun at its most unpretentious and jaggedly musical. Everything rocks, and just about everything works. Even well-worn rock ‘n’ roll sentiments like “I know you’re no good but I want you so bad” (from “No Good//So Bad”) or unimaginative bratty shade like “get lost, get bent, go home” (“Get Bent!”) go over like you’re hearing something electrifying. Because frankly, if there’s blood running through your veins, you are.

Although punks hungry for social commentary and righteous anger in today’s times won’t agree, I prefer Teenage Cavegirl’s sound to that of Austin’s reigning champions of the scene, the more socially conscious but also considerably more abrasive Sailor Poon. At any rate, the local scene is big enough for both approaches. And in barely more than 20 minutes, Candy Cigarettes establishes Teenage Cavegirl as one of Austin’s strongest young flag-wavers for the sonic pleasures of punk’s more musical side.

Watch the video for “Space Girl” below: