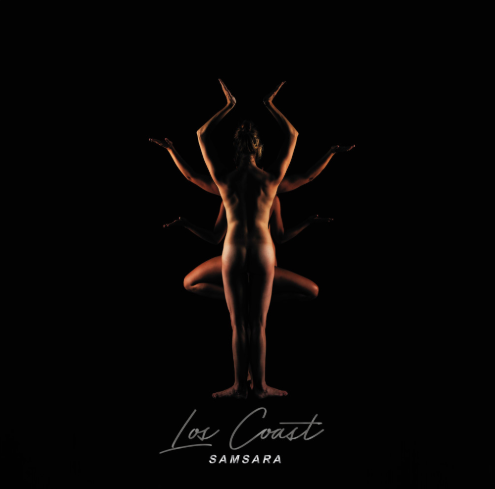 It surprised me a little to learn this was Los Coast’s debut album, because it seems we’ve been hearing about them around here for forever, or forever-ish, at least. Formed way back in the simpler times of 2015 by Trey Privott and John Courtney, Los Coast has been making its name in Austin for several years now. Whether Samsara measures up to Los Coast’s strong live reputation, I can’t say, as I haven’t seen them take the stage yet. But the record makes me want to, and does even more than that.

Los Coast bills itself as “psychedelic-pop-soul,” the music press that has covered them so far goes with it, and I certainly won’t argue. But to my ear, the “psychedelic” component of their sound is often little more than a dollop, maybe a quarter-cup at most. The other two parts of that self-description, though, are more fully in evidence throughout. And the whole package — however you categorize it — usually ranges from successful to, more than a few times, glorious.

In fact, I don’t know how many recent local records have begun with as good a foursome as “Monsters,” “Simplify,” “Graves,” and “(Everything But) The Kitchen Sink.” Though there’s more tasty stuff as you go deeper, that opening quartet just about gives you the full range of Los Coast’s considerable, funky power. Following a spoken-sound beginning to the album, proper opener “Monster” and “Simplify” are soul-propelled dance floor bait, with lead vocalist Privott leading a strutting but somewhat mystical charge on the former (“Do you know your own gravity?” he asks), and the band injecting a hint of gospel on the latter’s stomping soul-rock. The smooth horn-and-synth bed and the easy-pleasure “oh-oh-oh” chorus of “Graves” might make you miss the fact that it boasts one of the album’s best, most self-probing lyrics. (“One day in another place/I’ll teach myself what to erase/Write it down with style and grace/And fuck it up in uppercase.”)

“Kitchen Sink,” an immediately likable blend of funk and old-school hip-hop, feels like a mission statement of sorts for Privott and Los Coast, wrapping biography and personal philosophy in an impressive, rapid-fire package. Sample excerpt: “Mama’s in the kitchen doing all the dishes/Whistling, worried sick I’ll wind up in prison/She says if you’re colored, they’ll throw you in detention/Throw away the key and tell you good riddance … So I decided I got to make some good decisions/Keep my nose clean and keep my chakras in position/Make some records, get the whole world to listen/Without calling women bitches ’cause my mama taught me different.”

The playing is impressive throughout Samsara, with the vocals, keyboards and horns delivering a consistent rush and bassist Megan Hartman often stepping up to costar; she’s always ready to pluck out danceable lines. The album’s relative weak spot arrives in its just-OK midsection; the predictable “Testify” delivers exactly the musical and lyrical moves you’d expect from its title, and the synth-and-bass-driven instrumental “Cymatics” is unremarkable.

But to the extent that the middle is a stumble, the band rights itself in time for a bang-up finish. Remember when I said the album’s opening four songs present nearly the full range of Los Coast? Well, I say “nearly” because closer “Chesapeake” (Privott’s birthplace) shows they can churn out a lovely folkish ballad, too. “Chesapeake” succeeds the way the somewhat overwrought, overlong “The Morning Weight” couldn’t earlier in the album, striking a lovely chord in the way Mumford & Sons tries but usually fails. The band’s versatility isn’t in question before you hit “Chesapeake,” but it’s an exclamation point that underscores just how enjoyably eclectic this quintet can be.

A recent Austin Chronicle profile on Los Coast detailed, among other things, a creative tension between Privott and Courtney. To me, it reads like the kind of creative sensibility differences between bandmates that’s propelled many a great recording career. Whatever the band’s chemical makeup, it’s working more than well enough thus far. To redirect the question Los Coast asks in “Monsters,” does the band know its own gravity? So far, it doesn’t look like there’s a whole lot to weigh them down.