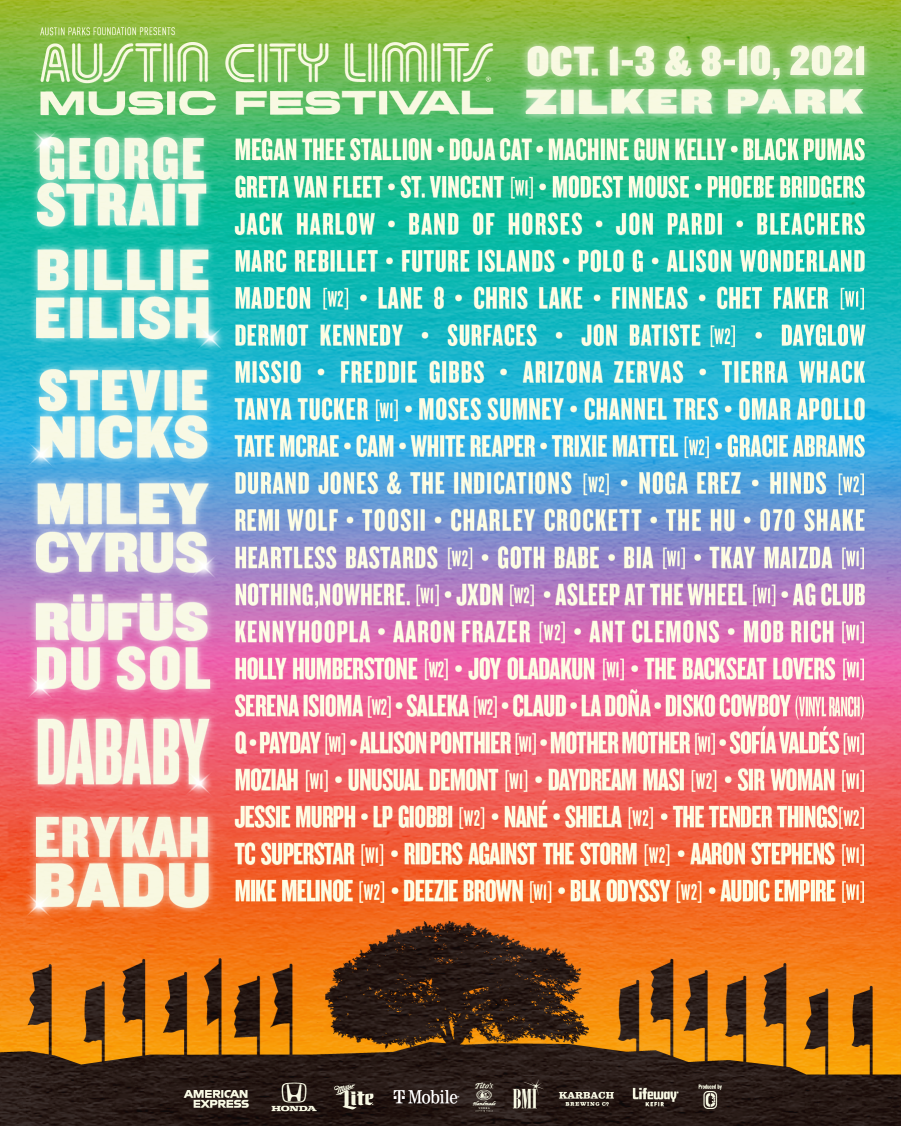 Assuming it’ll be safe in October, Austin City Limits Musical Festival will get an A for existence. No doubt Weekend 1 sold out the same day the lineup was released, in part, for this very reason. People are hungry for the wild, sense-overloading normalcy of a festival, and had William Hung headlined this thing, it still wouldn’t have had any trouble selling.

First thought: It’s not the most explosively compelling lineup in ACL history, but it’ll  do.

My second through 38th thoughts (estimated) follow below, with grades and notes for three groups: the headliners, the non-local “supporting actors,” and the local acts.

Yes, there’s star power. Yeah, there’s the eclecticism ACL goes for. There’s also the ACL-trademarked mix of superstars of the moment, aged legends of their genres and a few acts that can credibly serve as an alternative headliner for your Straits and Mileys.

If you’re a rock fan first and foremost, though, you’ve got to feel at least a little lowballed. Waving that flag most promisingly is Eilish, who was impressive as an early-evening feature two years ago, when some asshole stole her ring. Now 19, she’ll be several months past the drop of a new record that will undoubtedly sell enough to buy her thousands of fancier replacement rings. Giving her and bro/producer Finneas a headliner’s tools to set a mood could lead to something dark, weird and inspiring. Nicks does have that heaven-and-smoke voice loved by millions, with charisma to match. Miley is ably carving out her pop-queen-with-a-rock-seasoning niche (and image). While I admire her vocal ability and the adult performer she’s become, that’s all undercut by the fact I simply have no use for at least 80% of her most well-known songs.

Speaking of rock stars, Mr. “Rockstar” himself, Dababy, is a reasonable headliner rep for the genre that produces today’s Mick Jaggers and Stings. But for such a preeminent genre as hip-hop, does he go further than “reasonable” as its sole rep on the poster’s top (well, side) line? Not sure. Although this isn’t the case for yours truly, top-billed Strait will excite many Boomers and Xers who have already snatched up tickets (judging by Weekend 1 selling out within hours). He turned 69 this week, and lest you think he might have a few too many dark rings around the stump, note that he’s seven years younger than Sir Paul McCartney was when he headlined three years ago. People here still flock to Willie, after all. For me, though, I just don’t see this group producing any quandaries when you’re faced with a headliner scheduling conflict. Eilish is a must; the rest float between negotiable and missable.

This could’ve been a B+ if not for a few whiffs pretty close to the top of the poster. There’s little that could end up pushing me toward whatever stage Retread Zeppe… I mean, Greta van Fleet ends up on, and I have little patience for Machine Gun Kelly’s bro-y punk-hop vocal stylings or Jack Harlow’s mega-hit “Whats Poppin” … although the latter does fill an important niche in peppering a hip-hop song with basketball references. There aren’t enough of those out there.

Anyway, if Megan Thee Stallion shows this time, this crew (and others not listed) should collectively still make for some exciting afternoons and early evenings. St. Vincent’s set at the 2019 festival was a futuristic-looking hoot with compelling visuals. Doja Cat can sing and rap, and seems to have a show-woman’s aura. Down the poster, Spanish rockers Hinds are one of the better garage-y outfits to emerge in the past 5-6 years. They took their sound in a more stadium-y pop direction on last year’s The Prettiest Curse, so it’ll be interesting to see if they have a stage presence to match this time around.

Quick personal story, friends. On a Saturday in April 2018, I hit a $5 show at the Scoot Inn. The show was indoors, the crowd intimate, the proceeds going to a local music education charity in east Austin. Setup for each of the three young bands was extremely minimalist. The Scoot Inn’s interior, of course, had scarcely more light than your average seance.

Basically, this felt like a “neighborhood” show: a young crowd, maybe 50 people in attendance, tops, at the height of the night, a whisper’s version of an Austin live music showcase.

The opener was Shiela. The second act was Kady Rain. Three years later — following Rain’s 2019 appearance at Zilker — both of them have now graduated to ACL performer. You’ve got to love the possibilities this town offers.

Anyway, this grade for the locals is as much about representing Austin’s diversity of style as it is about the quality of the music (which is considerable in its own right). And this roster boasts pretty much everything, with veteran-rock money in Heartless Bastards, new soul-rock money (serious money) in Black Pumas, talented rappers like Riders Against the Storm and Mike Melinoe, Dayglow’s alt-pop, Charley Crockett’s country, Shiela’s satin-smooth R&B and more. No real complaints to be had here — even as my own verdict on Dayglow is incomplete and evolving.