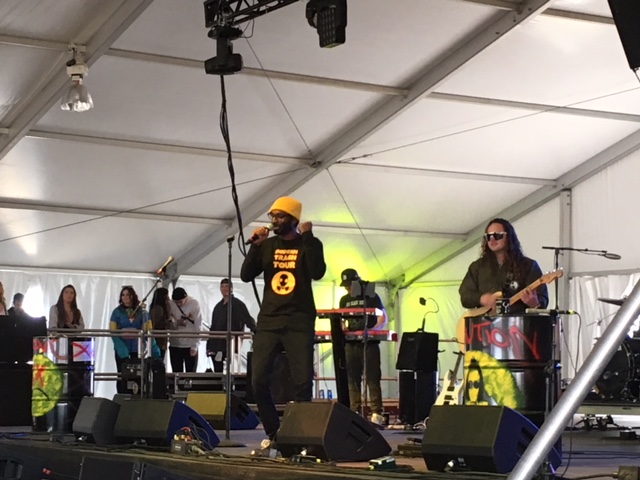 My recap on Friday’s events at Austin City Limits was titled, in part, “The misery that wasn’t.” For me, Saturday became The Schedule Conflict That Wasn’t. Not in a good way, though.

It’s a fact of life at every major, multi-stage festival, of course: If your tastes are diverse enough, chances are, there will be two artists you’d love to see that are playing at the same time. All of one, all of the other, or a split where you haul ass between stages? You must choose.

For me, Saturday started off with an overlap of two talented Texas rappers: Austin’s own Abhi the Nomad (top photo), playing from 12:45 to 1:30 on the Tito’s stage, or Houston’s Megan Thee Stallion, scheduled from 1:15 until 2 on the Miller Lite stage.

Initially, I planned to watch about the first 25 minutes of Abhi, then head over to Miller Lite. But Abhi — who I’ve only seen perform a brief set earlier this year at the Austin Music Awards — proved to be unabandonable. I’ll likely sing his praises more in my final festival recap, but for now, just know that him and his band were sick and funky, with Abhi’s capable singing and gifted flow on full display. After starting to leave Tito’s, I decided I didn’t need to see Megan Thee Stallion’s set from the jump as much as I needed to see the rest of Abhi. I stayed, and Abhi and crew didn’t make me regret it.

I made it over to the east end of the Miller Lite stage at 1:35, and found a mammoth crowd — and an empty stage. Yep, 20 minutes after her set was scheduled to start, Megan was apparently AWOL. I asked someone near me if there had been an announcement. He said there hadn’t.

My end of the crowd seemed remarkably calm under the circumstances. This wasn’t the headliner on a three-act bill showing up late, where you know they’ll eventually start when they start and finish when they finish. No, everyone knows ACL is on a tight schedule, and a set that’s supposed to end at 2 p.m. is going to end not a minute later than 2 p.m. Maybe it just wasn’t registering that Megan Thee Stallion, she of “Hot of Girl Summer” and a head of steam backing the hype behind her, was getting less and less likely to be part of Weekend 2.

A few minutes after I showed up, the first announcement came: Megan wasn’t in the house yet, and — perhaps relaying a warning the festival had already given her people — she had until 2:00 to finish her set. There was a low groan. A few people bailed. The vast majority stuck around. Even a sliver of hope is a powerful thing, I guess. About five minutes later, final word came. “Unfortunately…” was the opening word of that announcement, and the groan was about twice as loud this time, as everyone knew what was coming after that. She wasn’t going on.

At midnight last night, Megan apologized and “explained,” if you can call it that…

“I apologize to my Austin hotties for not performing at my 1pm set at ACL today. I did not make it in time from my show in another state the night before. I tried to still perform and they just told me my set was cancelled. I will do a make up show for my atx hotties soon.

Naturally, the “hot girl summer is over” cracks come easily to Twitter. But it’s safe to say this is a major setback for an upstart. It’s one thing to cancel with a few hours notice, as Lil Uzi Vert did last week. A time-of-set no-show isn’t something you see every day, or in my case, ever.

Fortunately, there was a lot of ACL Saturday remaining, and the rest of what I saw more than made up for the minor (for me) disappointment of the MTS no-show. I’ll be talking more about yesterday’s performances in my final recap, but a couple other notes: