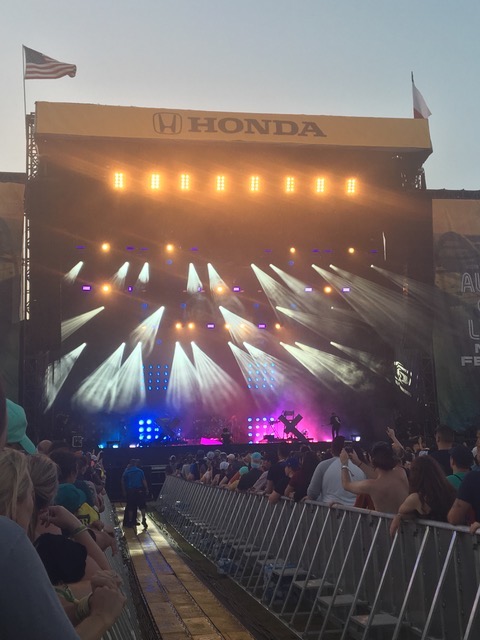 Back at a now-defunct festival in Kansas in the summer of 2011, I saw OK Go. With the temperature somewhere in the neighborhood of 95 degrees, the entire band was dressed in colorful ’60s mod-type suits. I don’t know if they were crushed velvet, but Austin Powers would’ve looked at home in them. During the set, singer Damian Kulash lamented to the crowd, “It’s too hot for rock ‘n’ roll, people.”

And with that in mind, here’s a question that occurred to me on Day 2 of ACL: Are shorts simply deemed not rock ’n’ roll?

I ask because on a steaming hot Saturday when everyone in attendance was wearing as little as possible, it occurred to me that artists very rarely wear shorts for their performances, even when it’s more than appropriate to do so.

You see everything from blue jeans to black jeans to funky sea green cargo pants, but rarely do any performers do themselves any favors by giving themselves lower-body breathing room. It’s not like you can’t make any sort of bold fashion statement if you select the right shorts. It’s something of a mystery to me.

Anywho, we’ll have a complete rundown of Weekend 2 after the festival’s over, but as we did for Friday, here are a few of the standout song performances we saw Saturday.

Chvrches, “Bury It” and “Leave a Trace” — Pounding synth-and-drum action and the uniformly perfect vocal dynamics of Lauren Mayberry made “Bury It” a literal banger. Another of Churches’ more aggressive (and best) songs, “Leave a Trace” made an extra impact coming on the heels of a short soliloquy by Mayberry on Ted Cruz, Brett Kavanaugh, and the treatment of women.

Japanese Breakfast, “Everybody Wants to Love You” — Japanese Breakfast paced their set well, frontloading most of the slower dreamier stuff, including and saving most of its more uptempo numbers for later. “Everybody Wants to Love You,” off Michelle Zauner and Co.’s 2016 album Psychopomp, delivered some rock punch to their set and bested their other performances, including recent single “Road Head” and a cover of the Cranberries’ “Dreams.”

Wombats, “Moving to New York” — The Wombats’ whole set was killer, featuring hard-hitting guitars, Matthew Murphy’s so-emotively-British lead vocals, harmonies galore, and four people who bounced onstage in full Wombat mascot attire. But there was extra juice to this Wombats “oldie” — “Moving to New York” is off their first album from 2007 — and it stood toe to toe with their excellent performances of “Give Me a Try,” “Jump Into the Fog,” and other more recent ones.

Sylvan Esso, “Radio” — Immediately following the nonstop, full-audio energy of Chvrches’ set, Sylvan Esso’s quieter brand of programmed electronic pop suffered by comparison. But they saved the best for last, with “Radio” and its high-energy beats lighting up the night.