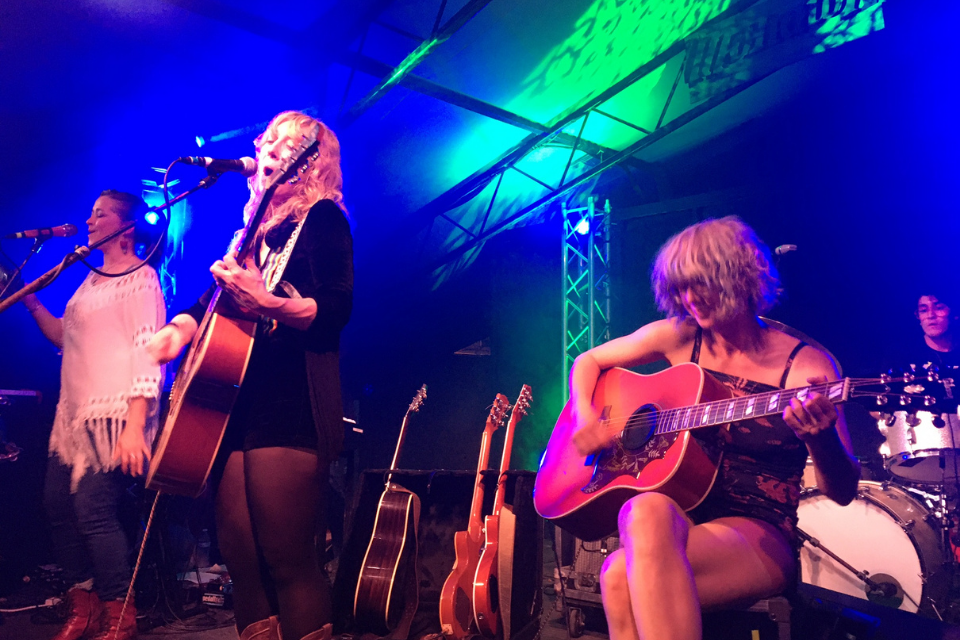 Before Heartless Bastards took the stage on May 30, the first thing to do was just to turn around and take it all in.

We were at the front of the Mohawk outdoor stage for take two of night two of the dive-ily magical Red River venue’s live-music comeback, delayed 48 hours by the previous Friday’s rain and lightning. There would be plenty of time — about 20 minutes shy of two hours, as it turned out — to take in what would be happening onstage in front of us. Before that, I needed to look behind us, to remember what a genuine crowd looks like. The Mohawk’s distinctive three-level layout offered the perfect opportunity to recapture the feeling of something so exciting and familiar, yet foreign for the past year and change. In fact, the Mohawk was the site of the last real concert I’d attended: Destroyer on Feb. 26, 2020.

The floor would eventually fill, but it was doing so pretty slowly — somewhat surprisingly so, since it hadn’t rained in a meaningful way in about two hours. But on the middle level, seats were filling in a hurry, perhaps owing to its access to the covered top patio in case the rain started again. There was something novel about just seeing … faces. Dozens of faces, in close proximity, looking down, stirring, anticipating. This is OK again now, right? It felt right. Even with Pfizer’s master concoction pflowing (sorry) through me for some time now, it also felt just a little dangerous.

Then the retooled Bastards took the stage, and it was definitely right.

It’s a whole new cast around mega-voice and guitarist Erika Wennerstrom. But as long as Wennerstrom’s presence is intact, holding onto the Bastards name is justified with any backing crew, from virtuosos to robots to holograms. And what the new six-piece version of Heartless Bastards showed on Sunday were depth and textures that suggest the new Bastards might be an even better live kick than the old one.

As Wennerstrom and crew sailed through a discography-spanning selection of Bastards music — from their garage-ier days of debut album Stairs & Elevators to the country-inflected rock-icana they’ve become widely known for — I kept taking in more signs of the familiar to go with all those faces behind me. It started with the now-9-year-old (seriously?) anthemic opener “Parted Ways,” which they didn’t finish before sweat was already starting to glisten on Wennerstrom’s face. Remember when we used to take seeing music stars sweating through a set for granted? No longer.

Hearing Wennerstrom overwhelm and melt a microphone had that proverbial old-shoe feeling, too. Her scaling and descent of a skyscraper-like vocal ladder, the uncommonly full-bodied falsetto that always makes folky offerings like “Only For You” so striking and resonant … coming from someone who’s now seen her live about seven times, it never gets old.

Backed by this bigger, beefier-sounding group of backing Bastards — Lauren Gurgiolo on guitar, Beth Harris on backing vocals, Jonas Wilson on keyboards, Sam Pankey on bass and Greg Clifford on drums — Wennerstrom sounded in mid-tour form. The band ably backed her throughout, including standout moments like her grand solo masterpiece “Extraordinary Love,” last year’s politically and spiritually charged Bastards return “Revolution,” and the high-powered nod to Stairs & Elevators with “Swamp Song” and “Gray.” It’s gratifying that nearly 20 years and a significant sound evolution later, Wennerstrom has never left those days behind in the Bastards’ live shows. The noisy live rush on “Gray” was another representation of something I’ve been missing for over a year: A rock ‘n’ roll band just ripping through a fist-pumping three-minute banger.

And hell, even a few technical issues served to make this return to normalcy feel aggressively … normal. You go to enough local shows, you know that’s always a potential part of the deal. Gurgiolo — situated directly above us on stage left and an initiator of friendly conversation during both sound check and the show itself — had some sound/equipment difficulties between her tastily executed solos (delivered with distinctively tense body language). Wennerstrom had some problems with her guitar as well.

“We got some technical stuff,” Wennerstrom said at one point while the band tried to work all that out. “You know one thing about COVID: Not that much fazes me these days.” As the problem went unresolved, she went into a brief, wry filibuster: “It’s been a crazy year, huh? Helluva year, right?”

After the Bastards closed with “Revolution,” the gratitude Wennerstrom showed to be back was genuine, touching and entirely mutual. The Bastards will release the band’s first album in six years in September, and new material mixed into the set, such as a song apparently called “You Never Know,” suggested the beat will go on for Wennerstrom and whatever her vision is for the band’s future output. For now though, the presence of genuine live music is enough. This was a real, full-fat, full-sugar, full-taste show, not a diet one with shaky broadband or other “not the same” restrictions. Heartless Bastards were a perfect return to it.