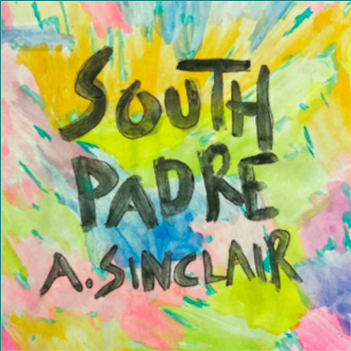 The last 30 seconds or so of “Lean Into It,” the opening offering on A. Sinclair’s new album, are an awakening, gravel-coated cannon shot of noise-rock tacked onto a standard-issue, slow-burn acoustic tune. It emerges out of nowhere and lasts just long enough to not overstay its welcome. Though nothing if its kind surfaces again on the remainder of South Padre, it’s a signal that Aaron Sinclair isn’t going to box himself in — plenty of stylistic drift is about to come for one of Austin’s most capable singer-songwriters.

That enthusiasm for changing lanes without running off the road is what distinguishes Sinclair’s fifth record and makes it solidly repayable. South Padre doesn’t have the moody rock crunch of Sinclair’s last full-length, last year’s Sunshine Ghost. But it does have a whole lot of stately strumming, gently insistent melodies, and successful ventures into country, psychedelia, and wit. And it appropriately has arrived in time for lazy summer patio nights — if such things still exist when it’s friggin’ 94 degrees at friggin’ 8 pm.

Despite its name, though, one thing this is not is a spring break party disc. Sinclair’s medium-high tenor sounds reflective and even melancholy on much of South Padre, perhaps nowhere more effectively than on the introspection and regret on the plaintive folk of “They Were Listening.” The easy acoustic laments of the well-arranged “Somewhere” — where Sinclair warns, “My advice isn’t worth the time it takes to hear” — wrap in nicely with horns and harmony vocals, making for arguably the most radio-friendly piece on the album. Or perhaps that honor goes to the country rock of “How Things Got Done, which builds from an easy opening to a climactic, virtually wall-rattling shimmer. For a smirk, there’s some Nude Party-reminiscent goofing about “why I got back into weed” to the exclusion of harder drugs on “City Life,” another agreeable country-rocker.

Unusually for him, Sinclair brings in some featured ringers on several tracks here, such as Booher on the reverb-steeped, vaguely Beatle-y “Laid Back” (think two parts proto-psych a la Revolver and one part the folk of Help!) and Beat Awfuls on “They Were Listening.” These guests into his world generally seem to help him realize some of the eclecticism that rounds out the record. In fact, the full-on electro-tinged psychedelia of “Information Inn,” done with Strange Pains, is a final curveball with a little more downward, 12-to-6 bite than anything before it (except perhaps for that ending to “Lean Into It”). “Inn” arrives with a chanting thunder just as you might find yourself winding down on that patio, finishing your beer and ready to go shower the evening humidity off you — giving you a last reminder that the guy you’re listening to can give you an in-your-face charge.

Though much of South Padre can be categorized as a very thoughtful “cookout record,” the best thing about it is that Sinclair has so many ways he can throw food on the grill and have it come out tasty.