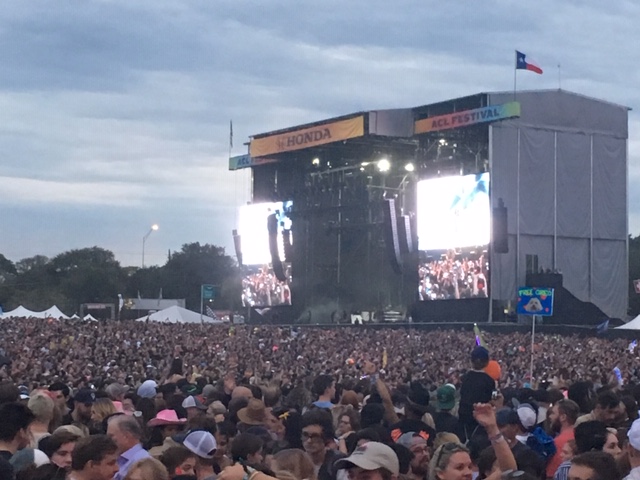 So, I’ll have a final recap of Austin City Limits Weekend 2 coming up later this week where, among other comments, I’ll rank my favorite shows of the entire weekend. Thanks to Lizzo, I’ve got a bit of a personal dilemma on that front.

After the incredible, two-stage-filling mob scene the reigning Queen of Body Positivity generated on Sunday night — just as she apparently had during Weekend 1 — I now have to figure out whether I should rank her among my favorite shows of this year’s festival.

On one hand, it was beyond inspirational seeing untold thousands of people form a Woodstockian mass around the Miller Lite stage where she was performing, the adjacent Honda stage (top photo) where her performance was being broadcast on the video board (without sound!), and plenty of acreage around those two locations. It was the most memorable moment of the festival, hands down — a moving, incredible turnout for a non-headlining artist who’s touched so many people in such a short period of time. And all for a one-hour set.

On the other hand, there’s the small matter that from my position, I really couldn’t hear much of anything. At all.

No, after marching over following Kacey Musgraves’ stellar performance at the other end of Zilker, I was pinned in ACL’s Beer Hall, the turf-carpeted shelter maybe 200 feet away from the Miller Lite stage, joining hundreds of other people who had similarly given up on a better vantage point. A friend had set out earlier to get up front for Lizzo — a laughable ambition given when she started that quest — but had ended up at the Beer Hall instead. So that’s where I ended up, and getting there took some doing.

I’d love to report that the performance was incredible. You’ll find descriptions along those lines plenty of other places. But in good conscience, I can’t. I did make out “Good As Hell” and the deservedly ubiquitous #1 hit “Truth Hurts” (with a crowd singalong as big and forceful as any I’ve ever seen). A video I got of “Juice” sure made being close to the stage look like fun. Being 6-foot-1, I was in better position to make out Lizzo and her crew than others, and saw plenty of energetic shaking, stalking and gesticulating. From my angle, the distant Honda board wasn’t much help. And hearing Lizzo’s asides and banter? Forget it. Think I made out her saying the words “health care” at one point. That’s about it.

But even for someone in my position, what was incredible was the scene. There’s a true majesty in seeing what the Austin-American Statesman accurately called a “sea of humanity” descending on a talented, enjoying-her-moment performer furthering inspirational music and an inspirational message. Lizzo’s impact is clearly going beyond just the product she churns out in the studio, and it’s a beautiful thing to see. She has a place in ACL lore forever.

Thanks to the singalong, I’ll go ahead and count “Truth Hurts” as one of my favorite song performances of Sunday. Here are a few more standouts (links to official videos), and I’ll have more on day three in my festival wrap:

Kacey Musgraves, “High Horse” — Thanks to two days of less-than-ideal weather, Sunday’s 80-and-mostly-cloudy atmosphere enhanced the performances of artists with a breezier feel, whether it was reggae veterans Rebelution or Musgraves and her adventurous, next-level country. She delivered a pleasant but rousing set worthy of the superstar she’s become, and “High Horse,” her takedown pop masterpiece, packed both a galloping punch and appropriate visuals.

Mallrat, “Groceries” — Mallrat’s Grace Shaw and her accompanying beats make for minimalist indie-pop enjoyment along the lines of an Australian Sylvan Esso. Closing with the catchy bounce of “Groceries” put an energetic exclamation point on a set that showcased the 21-year-old Shaw’s impressive collection of easily digestible, chill tunes.

Mumford & Sons, “The Cave” — Bringing the Austin High School marching band onstage to play on “The Cave” was an A+ move by Marcus Mumford and crew. According to Mumford, it all came together on Sunday morning with a call to Austin High’s principal. When the drumline cadence boomed announcement of the band’s arrival, it took me, and probably a lot of other former high school marching band members in the crowd, back to a time when marching in to a beat could make you feel special. Hearing the AHS band’s horns add color to one of the Sunday headliner’s biggest hits, and knowing it’s something they’ll all remember forever, added more great vibes to a final day full of them.