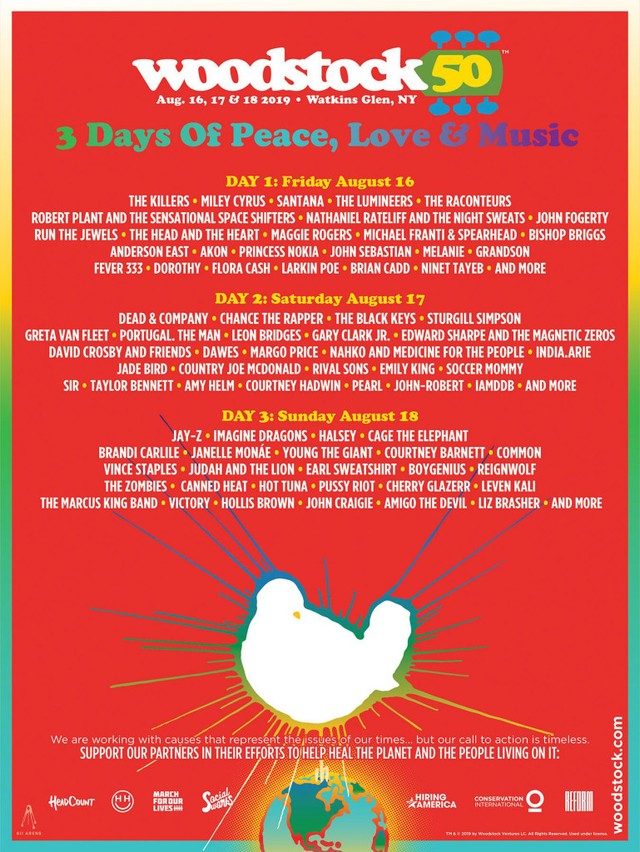 The lineup above is pretty stout and diverse, isn’t it? Much better than Fyre Festival. Now admittedly, I don’t have encyclopedic knowledge of failed and cancelled music festivals. But I have to think that, in terms of starting-point excitement and ultimate no-go, Woodstock 50 — officially and inevitably cancelled on Thursday — has to rank among the biggest, most devastating and most embarrassing non-events in music history.

Granted, I never had any plans to attend Woodstock 50, but I was rooting for Woodstock to regain some of its lost mystique. I’m old enough to remember coverage of Woodstock ’94, the silver-anniversary revival that brought together both huge stars of that moment (e.g. Nine Inch Nails, Metallica, Sheryl Crow) and iconic fossils encoring from the 1969 festival (Bob Dylan, Santana, The Band). Naturally, there was cynicism about how inevitably corporate the thing would be, how the original festival was a product of its moment in history and its magic can’t be recaptured, blah blah blah. Then, by all accounts, it turned out fine. More than half a million people showed up (just like the original, that was way more than actual tickets sold). Once again, it rained. NIN solidified its burgeoning status as world-rulers with a legendary wet-and-muddy performance. Green Day, also in the middle of conquering the year with Dookie, got in a mudfight with the crowd. It was peace, love and chaos reminiscent enough of the original that no one ended up bloviating about how it tainted the mystique of the Woodstock name.

Then, of course, Woodstock ’99 came along, and “tainted” doesn’t even begin to describe what it did to Woodstock’s legacy. If there was an ongoing plan to continue holding Woodstock every five years, that plan was destroyed by the appalling violence and lawlessness of the ’99 festival. Woodstock ’99 is a dark moment in rock history from a societal standpoint, and from a musical one as well, owing to the fact that the lineup — heavily reflective of the very-late-’90s shift toward frattish rap-rock and post-grunge/nu-metal — hasn’t aged well. (Out of a fascination with the macabre, I’ve always wanted to meet someone who was there. What did they witness? Do they see themselves or their friends on YouTube clips and get embarrassed by how they were acting or what they were rocking out to? Far as I know, I’ve never met any of these people. I have a feeling many of them would rather not even admit to being there.)

Last March, when the lineup above dropped, I had real hope for a “Behind the Music”-style redemption. As both a definition of music’s current moment and an obligatory nod to Woodstock’s past, it certainly looked comprehensive, eclectic and enticing. You could argue that it could’ve used more pure rock, but there are true heavyweights of all genres, good second-tier talent and good indie acts and up-and-comers. Gary Clark, Jr. would’ve represented Austin. Even the presence of Pussy Riot, international pillars of free speech, was significant, suggesting to me this might end up being a musical overview of the ’10s — an appropriate bow on the decade, the way the original Woodstock was and the way Woodstock ’99 wasn’t.

Instead, the problems with a major financier pulling out; the desperate last-minute move to Maryland; Jay-Z and John Fogerty bailing; and the fact that tickets never even went on sale, despite that this shindig was happening in just two weeks — all that made Thursday’s news hardly surprising, but also a final, painful disconnect of the ventilator. It won’t be the ’99 festival, and it won’t be Fyre Fest, and for that, we should all be grateful. But it’s still disappointing that it won’t be anything at all.

Will there ever be another attempt at a Woodstock? Hard to say. But I hope that with one of rock’s most markable anniversaries happening this month, we see a slew of fine retrospectives and, yes, even thinkpieces on the 50-year anniversary and what Woodstock 1 meant to its generation and future ones. There are probably still stories from those three days worth telling, and even worth retelling. And after taking another shot to the jaw, Woodstock’s legacy deserves that more than it deserves another dark recap of “The Day the ’90s Died.”