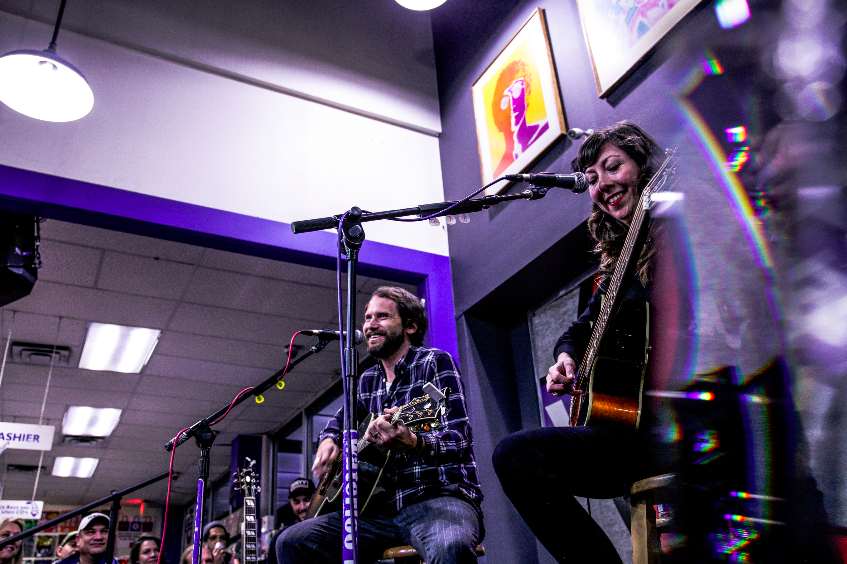 “Some of the cast of “Night Court!”

Wish I could link directly to that golden moment from Kenneth Parcell on this episode of “30 Rock,” but it seems I can’t. Anyway, Waterloo Records’ in-store show last Wednesday put that moment in my mind when we got … some of the Silversun Pickups!

Singer-guitarist Brian Aubert and bassist-backing vocalist Nikki Monninger acted as a two-member delegation of sorts prior to the L.A. quartet’s show that evening at Stubb’s. But two out of four was enough for a good five-song diversion, with electric-acoustic instruments and the earnestness the Pickups usually bleed giving their mini-set a vintage “MTV Unplugged” feel.

Of course, if you remember the golden era of “Unplugged,” you’ll also remember that most artists who appeared on it took themselves immensely seriously for that hour of their lives. (Maybe that outwardly intense alt-rock artistry of the ’90s even looks a touch ridiculous now; I haven’t watched one in awhile.) Good thing that wasn’t the case for Aubert and Monninger, who were just at Waterloo to knock out a few numbers for free and have some loose fun.

Their genial presences matched that aim. Standing stage right, I sneezed during quick-chugging opener “It Doesn’t Matter Why,” and Monninger quietly said “bless you” as she plucked away, amusing everyone who heard it with her considerate multitasking. She and Aubert employed snaps, claps, and gentle humor during the half-hour, with Aubert complimenting the crowd on the proficiency of its accompanying snapping during “Don’t Know Yet.” (“We’ve seen the world snap,” he noted, “and it’s not pretty.”)

Musically, they were on point throughout, even while cracking jokes during a couple of instrumental breaks. “Freakazoid” – like the two aforementioned songs, off last year’s album Widow’s Weeds – benefited from both Aubert’s trademark Billy Corgan-esque vocal power and Monninger’s rumbling acoustic-bass foundation. And for a closer, the guitar lick of “Panic Switch” — the Pickups’ greatest song and 2009 chart-topper — lost little of its urgency as an amplified acoustic charge-up.

Aubert and Monninger have been at it as part of Silversun Pickups for about 20 years, and can do a quickie show like Wednesday’s in their sleep. Fortunately, they did it while awake — and smiling.