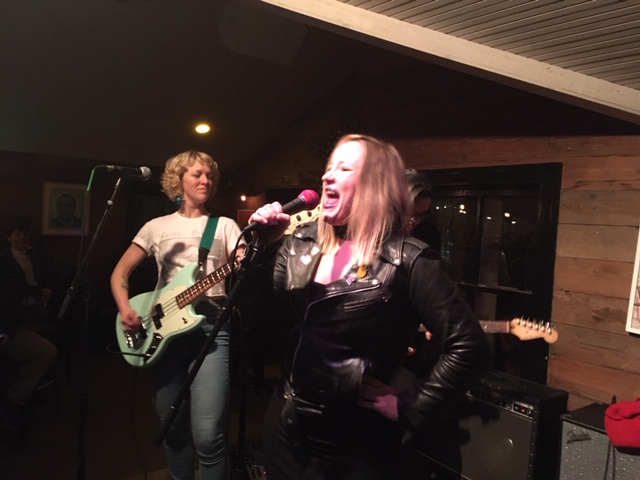 For those of us with a young person’s musical adventurousness, but an old soul’s mindfulness of clocks, limited energy and next-morning obligations, Radio Coffee & Beer can be a lifesaver.

If you want to see cool local music on a Saturday night, but you’re feeling too tired/old/lame (or all of the above) to stand in the trenches for a three-band bill that kicks off at 10 p.m., Radio is often where it’s at. The South Austin staple closes at midnight on Saturdays, so unless you’re north of age 83 or adhere to a Flanders family bedtime, you know the headliner’s forced to release you at what you’d consider a decent hour. There may not even be three bands; there may be just two. They may even play economical, to-the-point rock or pop that makes the show akin to a crisp baseball pitcher’s duel with a few timely hits: An efficiently paced good time that gets you home and fast asleep before the neighbors’ party enters the “drunken babbling on the balcony” phase.

Led by cheery, high-register party-starter Jolie Flink, Mean Jolene zipped its way through barely more than 40 minutes of lightly sweetened gourmet garage pastries. Most of its set pulled from the group’s second record, last year’s tremendous Try Harder. Opening with one of the record’s sharp-edged standouts, “Flipped Switch,” Flink and the band came out firing with their leader sporting glittery purple lipstick and a need to move. She sashayed in place at the mic and sent her long blonde hair flying with some headbanging, not letting the notoriously small stage impede her sense of fun.

Nor did Flink even let the stage constrain her at all. When she felt like it — as on the fleet and undeniably appropriate cover of “3 Small Words” from “Josie and the Pussycats” — Flink hopped down into the crowd, sidling up to a few people as she sang. “Sick of Love” found her going to her knees offstage. The instrumentalists of Mean Jolene — Ali Ditto and Steven Garcia on guitar, Maud Morgan on bass and Adam Sharp on drums — provided punchy and sometimes growling accompaniment, with songs like “Dark Harmony” leaving room for them to stomp their way through some hard-rocking breaks.

About the only downside of Mean Jolene’s set was out of the band’s control: Flink’s vocals could have been turned up a bit, as her high pipes occasionally blended too far into some songs. But overall, the band lived up to everything Try Harder promised for them as a live act. They’re engaged players with a strong, well-rounded collection of songs, and a brightly amped frontwoman like Flink helps assure a good time.

Opener: Van Mary
“I’m sick and I’m losing my voice, so I don’t know how this is gonna go. But my band’s gonna help me sing a little bit.” Emily Whetstone, singer-guitarist of fellow locals Van Mary, managed expectations nicely with that caveat, and it more than excused an opening performance that ran less than 20 minutes. Other than single and set closer “New Mexico,” the folk-tinged, somewhat First Aid Kit-reminiscent indie power ballad inspired by Whetstone’s terminated pregnancy, Van Mary presents as a capable straight indie rock band. The handful of songs they performed was enough to suggest that they’d be just fine in 40 minutes at full strength. As it was, Whetstone, armed with some strongly raw lyrics, made it through with the help of guitarist Emily Ng, bassist Katelynn Garza and drummer Adrian Audain. “My voice is giving out,” she updated everyone about halfway through, before the band’s performance of “Ennui.” But songs like that one and the especially pointed “Dead” (“Think I’d rather be dead than to spend one more night with you in your bed”) didn’t suffer from her struggles.