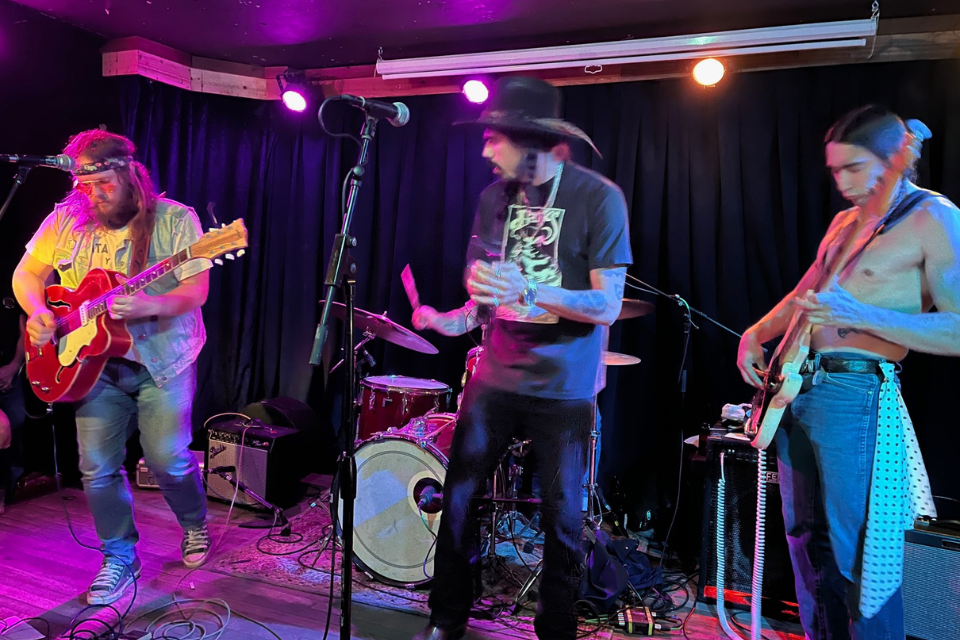 If this lineup for the Bad Lovers’ single release party was “all like 2014,” as Lindsey Mackin of Annabelle Chairlegs said near the start of her solo opening set, well … take me back?

Simpler times those were, 2014. It was the year I moved to Austin — right at midyear. For the most part, getting my feet wet not just in the local music scene, but in the whole city, I didn’t get to catch any of these acts at the time. But from start to finish at a show that kicked off at Hotel Vegas at around 9:40 and wrapped up a little before 1 a.m., I was glad this minor-throwback bill could come together for a high-energy show that was by turns rootsy, country, folky, psychedelic and even nasty.

Yep, it was eclectic. It was also a little ragged at times — both Bad Lovers (top photo) and the Crack Pipes had to start a song over. Rattlesnake Milk’s Lou Lewis needed to hunt down a new cord after their set had started. But under Vegas’ 10ish-foot-high ceiling, all the acts offered a unique command and a crisp urgency to them. Hats off to 2014 Austin.

The Bad Lovers
Mackin’s invocation of eight years ago came in the context of letting everyone know the Bad Lovers were her “first favorite Austin band.” This was their party, with the stated reason being the release of “Throwin Stones,” a new tune worked into the final third of their 35-minute stampede. It recalls *the* Stones themselves, in fact, with a guitar-chord punch of a “Jumpin’ Jack Flash”-era flavor, and it was a new rocker worth dancing to. But the band didn’t highlight or call out “Throwin Stones” in any way, which might’ve been just as well with so many other rootsy and danceable nuggets. Opening charger “Things That I Forgot” was an exhilarating kickoff, and after just two songs, drummer Caleb Dawson was prompted to lean into his mic and ask, “Damn, are we on fire, or what?” He was right, too. Even after an admitted fuckup (and a callout of the culprit) that prompted a restart on another recent single, “Michelada River,” the fire didn’t abate.

Rattlesnake Milk
Although I wouldn’t claim these Lubbock-originated (a decade ago) country-rock/rockabilly transplants made a massive impression on Friday, their set was still enjoyable. It perhaps took a little bit of time for Lewis and Co. to regain their momentum after technical problems prompted Lewis to call out to the Bad Lovers’ Felipe Granados, “Yo, Felipe … Felipe … Felipe … got a guitar I can use? My shit’s fucked, bro.” Turned out his cord was the problem. But they recovered for some shuffling and swaggering with the likes of the “woo”-punctuated “Bank Robber,” as well as a surprising (for me) cover of Elvis’ ballad “Love Me” that brought the set to an abrupt end. Broad, cap-clad and tatted with cowboy boots, Lewis has the stature of a blue-collar alt-country star.

The Crack Pipes
I marveled at the rip-roaring excellence of The Crack Pipes’ Fake Eyelashes back in 2018 — their first album in more than a decade — and then forgot about these Austin garage legends, frankly. Until Friday, when they took the stage second and rocked with a noisy psychedelic blues-rock fury. Ray Colgan spent the set belting, shouting, yowling and emceeing almost exclusively in hard-to-decipher reverb as his fellow Pipes pounded away, with Coby Cardosa’s keyboard in particular giving the set its gritty classic-rock texture. For such a short set — they all were — the Pipes packed in enough raw, bluesy freakout to remind people that, pushing 30 years after their founding, they’re still here, and still badass.

Lindsey Mackin
Annabelle Chairlegs has been on my “see live” list for a couple years or so now, since I heard the Nancy-Sinatra-on-punk-pills goodness of “Candy Apple Red” and got hooked. Still haven’t seen the band in all its indie-noir glory — which is a bit of a disappointment, as I have an affinity for referring to bands named like this as “Chairlegs” on second reference, as if they’re individual people. But now I’ve seen Mackin by herself with a guitar, and that’s definitely something. For an opening 20 minutes, her textured, soothing and elastic voice carried an entrancing power, highlighted by a light touch sometimes punctuated with Regina Spektor-esque jumps. It was a satisfyingly quiet set that showcased the Karen O-like versatility Mackin has displayed throughout Chairlegs’ recorded career.