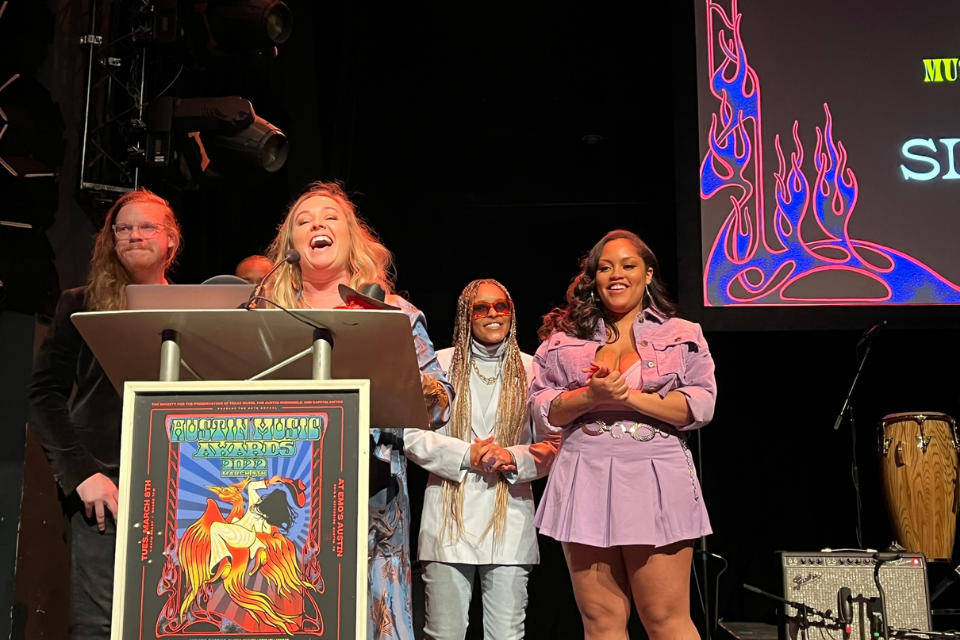 Yes, I did miss this. Two years away from the ragtag, buttons-loose, buzzing, not-even-faux-formal feel of the Austin Music Awards made the heart grow fonder.

The AMAs, which I’m christening the Dive Bar Grammys as of this week (and slightly hoping it sticks), are a one-of-a-kind experience. It’s been two years since they were a live show, and that last time was essentially the night the world officially shut down. I’ll always remember the nervousness I felt that night in March 2020, standing among hundreds while a novel virus had already started spooking the world. And I’ll always remember last Tuesday, when the AMAs rightfully returned — divier and more informal than ever, with a change of venue from the more august and ornate Moody Theater to Emo’s. I prefer Moody. Even with the venue downgrade, this return — highlighted most by triple-award winner Sir Woman (above) and their wonderful closing set — was an event Austin’s music community needed.

Make no mistake, the name “Dive Bar Grammys” has basically nothing to do with the actual venue the AMAs are held in, and more about their general feel and the delightful possibility of imperfection. Appropriate dress is naturally whatever the hell you want, and although women may (or may not) dress like they’re going out, the only male apparel approaching “formal” usually exists among whatever colorful suit jackets emerge among the country performers in the onstage lineup.

The hosting duo usually has little or no experience at emceeing awards shows, which was the case this year with KUTX’s Taylor Wallace and local comedy favorite Avery Moore. There may be technical difficulties — as there were this year, when absent Best New Act winner Pussy Gillette’s taped acceptance speech needed four tries before we could finally hear the audio that went with the video. And of course, the trophies themselves — the cool red-faced, featureless cowboy hat-topped heads — are Austin whimsicality all the way, a long way from Grammy glitz. Much like the real Grammys though, many of the winners — your established Austin superstars — are showing up to accept their 17th AMA or something, and there are good odds they don’t even overtly display them all at home.

Anyway, getting a version of all this back, after two years, was a joy. Sir Woman was the night’s finishing, new-breed star power and its highlight. Kelsey Wilson and her 826 bandmates (OK, nine) accepted the trophies for Best Vocalist (Kelsey in a tie [!] with Ruthie Foster), Song of the Year (“Blame It on the Water”) and Music Video of the Year (“Party City”). Wilson paid tribute to her recently passed father, Buddy. Then, they swaggered through a four-song, 20-ish minute set that included those aforementioned winners, plus their earliest calling card as a band, “Bitch.” Wilson sang powerfully, with that at-ease cheerful cool that defines her, while backing singers Spice and Roy Jr. grooved all over the stage. A not-small number of people bounced early, well before Sir Woman began playing. They really shouldn’t have.

The switch from the AMAs’ usual 1-2 song sets to as many as four or five this year was a welcome one, giving you more of a chance to see artists display their stuff. The cumbia-rock of Money Chicha, including a guest shot from Best Latin winner Gina Chavez, opened the night’s performance schedule, with lead guitarist Beto Martinez’s fleet-fingered solos seizing the spotlight. Bastrop rapper Deezie Brown had a quick tongue and engaging stage presence. The tribute to Texas songwriting luminary James Hand, who died in June 2020, featured appropriate trad-country cinematics on the stage’s perimeter — dancing couples surrounding the cleverly named James Handlers, featured Beth Chrisman and Corey Baum. Best Metal winners We Don’t Ride Llamas, four young siblings with an intriguingly eclectic take on hard rock, showed why they’re a band to watch for a population well beyond metalheads with excellent new song “Venus & Mars.”

The rest of the night’s winners were a mixture of mild surprises and not. Heartless Bastards, off a strong 2021 album in A Beautiful Life, somewhat surprisingly won Band of the Year over Sir Woman and BLK ODYSSY, whose BLK VINTAGE unsurprisingly took the Album of the Year prize. Molly Burch’s move into essentially full-fledged pop earned her the trophy for that genre over top competition Dayglow, another mild surprise even though both artists spent 2021 bolstering their national profile. James McMurtry (not present to accept) deservedly earned Songwriter of the Year. For the life of me, I don’t and won’t understand how, with 10 nominations for Album of the Year, there was no room for his essentially perfect The Horses and the Hounds. Oh well.

As for the hosts, Wallace and Moore did what’s required for such an inherently ragtag, loose production, powering through some technical issues and getting more comfortable as the night went on. Wallace’s gregarious radio-host manner and Moore’s wry, Natasha Leggero-like vibe more than worked.

Ultimately, the stars of the night were 1) Sir Woman, and 2) the fact that any of this was happening. Billie Buck’s poster for this year’s AMAs, featuring a cowgirl triumphantly riding a phoenix out of abstract flames, couldn’t have nailed the significance any better.

“We’re just gonna scroll down here. We’ve never done this before. Look at us go, using our laptops like millennials.” — Cohost Avery Moore, using the on-podium teleprompter early in the show

“I lost my pops this week, and everything we do now is for Buddy Wilson.” — Kelsey Wilson of Sir Woman

“I haven’t put out a folk record in 10 years, so this is very funny.” — David Ramirez, accepting his award for Best Folk/Bluegrass

“Tonight’s awards are brought to you by CapMetro. CapMetro: We may not always be on time, but we also might not show up. Sorry not sorry.” — Moore, in one of several one-liners roasting the night’s sponsors