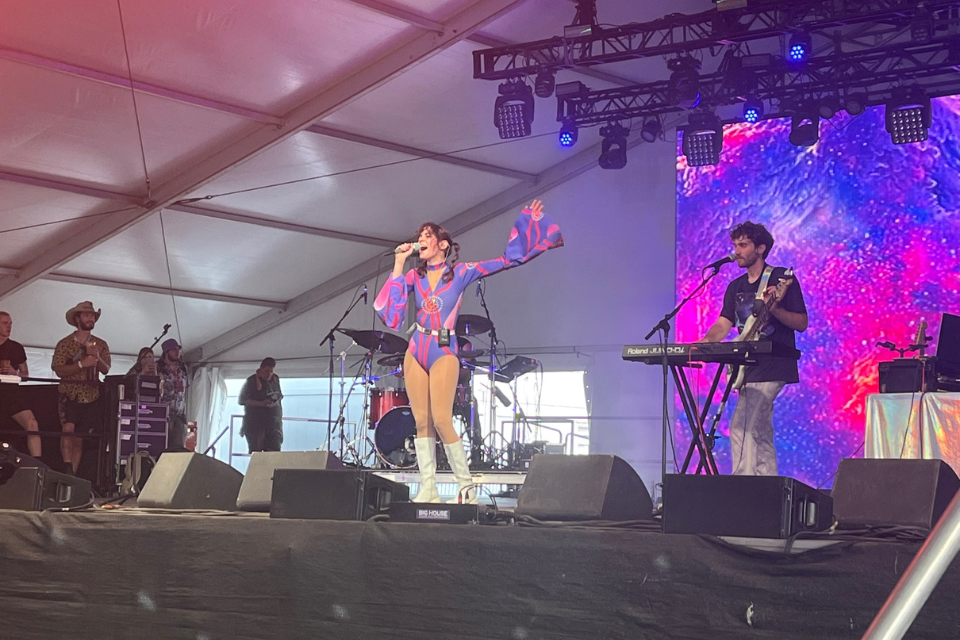 Running around for my final day at ACL Weekend Two on Sunday, I realized just how little overt politics I had seen from any performers. With a midterm election coming, post-Roe America just a few months old, and plenty of other cultural and societal strife jamming minds and feeds, the assumption was that artists would invoke politics repeatedly.

That hadn’t happened before my eyes on Friday or Saturday, and by the time I wrapped up my night with Kacey Musgraves, there was no change. Signs and shirts, yes, but next to nothing onstage.

Was I just at the wrong sets at the wrong times? Almost comically, in retrospect, it seems the answer was somewhat “yes,” although seemingly, some of the artists got it out of their system at Weekend One. I watched the Chicks for an hour and change last weekend, but not long enough to see their invocation (through imagery) of abortion rights and victims of racist violence. I didn’t catch Japanese Breakfast (most unfortunately), who endorsed Beto O’Rourke, or Lido Pimienta, who slammed abortion bans.

But even among what I did see, I was quite surprised to see little or no politics at all. In previous years, you couldn’t avoid it if you tried. Here, without trying, I managed to.

As the Saturday night headliner, Pink, who responded to the Supreme Court overturning Roe by releasing “Irrelevant,” didn’t play that one, or otherwise get overtly political in any way. A week after invoking Ted Cruz in “High Horse,” Musgraves — headlining Sunday night opposite Red Hot Chili Peppers — didn’t do that this time. A baseball cap-clad Beto wordlessly brought her a beer onstage, but that was as political as she got. Many artists just seemed content to put on a fine show.

And there’s not a thing wrong with that. Anyway, if young and middle-aged popular musicians are being honest with themselves, they’re often preaching to the choir when it comes to rallying their concert audience to vote, or opening their eyes to a political issue the artist believes needs attention. It’s doubtful, for example, that the aforementioned Breakfast (the absurdly talented Michelle Zauner) converted or unlocked any new voters in endorsing Beto on Sunday. It’s also probable that a decent number of the people watching her weren’t even Texans. A show can be an emotionally energizing rallying event, or it can be pure escapism. There are no wrong answers there.

What I did see Sunday, in a bit of a scattershot final day that had me scampering all over Zilker, was a satisfying potpourri. Splitting between Spoon and Magdalena Bay (top photo) in the 4 p.m. slot was a difficult decision to make, but as this was my fourth Spoon show, that was my call — and it was ultimately one I didn’t regret. Spoon hasn’t been a super-compelling live act every time I’ve seen them, but it seems big events in Austin bring out the best in them. They were explosive at Waterloo Records during SXSW in 2017, and found something resembling their most jagged energy for the first 20 minutes of their set last Sunday, with Britt Daniel in fine voice. Over at the Tito’s tent, Mag Bay (singer Mica Tenenbaum and producer/instrumentalist Matthew Lewin) broke big waves with dance-pop power, filling the covered stage with a loud, synth-y shimmer.

Earlier in the day, locals Urban Heat (led by Jonathan Horstmann, whom I sat down with for an interview the day before) seemed unbothered by the 3 p.m. atmospheric heat, pounding through an enlivened set of ’80s-reminiscent synth-rock. Horstmann’s svelte frame and untethered, arm-wielding use of the small BMI stage at several points echoed Freddie Mercury.

Catching a bit of electronic/house producer and singer Zhu — refreshingly, backed by live instruments — managed to hold my interest longer than many more musicians of his ilk do; sampling CCR’s “Have You Ever Seen the Rain?” was a particular surprise that worked. I then hit the end of Marcus Mumford’s set just before he closed with the New Basement Tapes gem “Kansas City,” and being a KC native who’s always found Mumford & Sons to be a bit on the bland side, that was all I needed from him. In its driving Brit-icana way (see what I did there?), “Kansas City” slapped.

After that, essentially, came Musgraves and the end of my weekend. More on her below as we move into our Weekend Two superlatives.

1. The War on Drugs — Nothing fancy elevated the War on Drugs above the rest of the weekend’s performers. Just a collection of bleeding, introspective rock songs that evoke Springsteen with a heaping scoop of subtlety — along with a perfect dusk-to-night setting; crisp, perfect playing; and well-deployed lights. The early peak of “Pain,” “Red Eyes” and “I Don’t Wanna Wait” was a collective trio of dynamic-shifting anthems that left this performance on top.

2. Phoenix — Here, there was a slight amount of augmenting fanciness. Primarily though, Phoenix displayed a fiery energy that doesn’t always come through even in their most invitingly radio-pure rock hits. But the Eurodisco influence underpinning their electro-rock sound seemingly became the impetus for some colorful and imaginative backdrop visuals — pastel pinks, blues and the like — that reminded you they could be doing this in an Ibiza club and it’d be just as at home. And rockers like openers “Lizstomania” and “Entertainment” were buoyant and sharp-edged. Thomas Mars ending things with a long, off-the-path crowd surf deep into the people was a fun final stroke as well.

3. Wet Leg — If you caught my day 1 quick recap, you know many of my thoughts on Wet Leg’s Friday afternoon set already. But beyond their cheerful, almost uniquely witty post-punk spirit, and beyond the amusing interlude where Rhian Teasdale and Hester Chambers both tried their hand at tattoo artistry (on a cardboard sign) to satisfy a fan’s request, Wet Leg sequenced its setlist well and added some musical variance to the way the songs present on their wonderfully engaging debut album. In particular, making the slow opening of “Too Late Now” even slower, and the fast-building climax even faster, added excitement to arguably the most unique song in the band’s young catalogue. “Obvious,” the set’s slowest and most somber song, allowed Teasdale to show she can handle something prettier and more melancholy. And “Chaise Longue” just may have to be their closing song for the rest of their career — Wet Leg may write better songs (I would argue they already have), but they may never come up with a better riff.

4. Pink — To perhaps explain this ranking, I’ll start with the mildly disappointing stuff first, as there was more of it than I anticipated. There were two Pink-ordered song restarts: one for a weird dissonant noise problem, the other because her acoustic accompaniment on a guitar-and-voice showcase was apparently messing up. Both of those came on covers, of which there were a surprising number — too many, in light of how many megahits Pink can fill two hours with. There was no “U + Ur Hand,” her greatest and most biting rock masterstroke. And at a few points, it seemed she was over-relying on backup singers.

When you have all that, and everything else about the show is utterly phenomenal, this is where you end up on the list. Pink is every bit the commanding, stage-seasoned pop queen that her recorded output, her public persona and the loving documentary “All I Know So Far” have always indicated she is. And no matter how much you’ve heard about her aerial zipline work on “So What” — whether from hearing or reading about it, or from seeing it in the documentary — nothing fully prepares you from seeing it above your very head, watching her become a breathtaking circus act as she sings (I’m assuming it was for real there) with admirable clarity. That performance, “Raise Your Glass” and “Fuckin’ Perfect” were all fun stunners that helped offset the relative negatives. Seriously though, no “U + Ur Hand” while granting space to that many covers? Pink graciously teased them as “songs I wished I’d written,” but the degrees of success were varying. Bishop Briggs’ “River,” punctuated with smoke grenades, was great (after a restart); 4 Non Blondes’ “What’s Up” was fine; but a run-through of “Bohemian Rhapsody” added nothing to what we’ve all heard Queen do 2,617 times. Could’ve scrapped another cover and found space somewhere for “Sober,” too, but really, these are all minor quibbles. She was still great.

5. Kacey Musgraves — Not to invoke too many legends here, but remember when I said Urban Heat’s Jonathan Horstmann recalled Freddie Mercury at times with his stage presence? (If you don’t, please read more carefully.) Well, as Kacey stalked the stage in her boots with a nonchalant, deliberate gait, a non-strut that managed to have all the bravado of strutting, she brought Dolly Parton to mind. Since the internet and the real world have all agreed in recent years that Dolly is the gold standard of all things that shine with gold, I can’t think of higher praise I could give the Girl from Golden herself. Musically and theatrically, Musgraves was straightforward but wonderful. I enjoyed no moment more than “Merry Go ‘Round” and how it amounted to a victory lap over the naysayers at the record label a decade ago; she introduced it by recalling how her label thought the song would “fall on its ass” and that a woman shouldn’t be singing something so dark. “Slow Burn” surprised me as a closer, but in beefing it up from its incarnation as the memorable opener on Golden Hour, she really made it work.

A few quotables
–“Today has a little bit of a gay feeling, because I’m here, and Lil Nas is here. And Pink — that’s a very gay color. I’m an OG: an original gay.” — Boy George

–“If you have something that you would like to do, go do that shit.” — Tai Verdes, repeating the message to illustrate the gift of life and rousing the crowd to yell “Go do that shit!”

Best flag/totem
“Aquí pendejo.” Scrawled on a flag in marker. Outstanding. And in light of the fact that the usual Mike Tyson “A-thee-L” totem seemed to be absent this year, an easy #1.