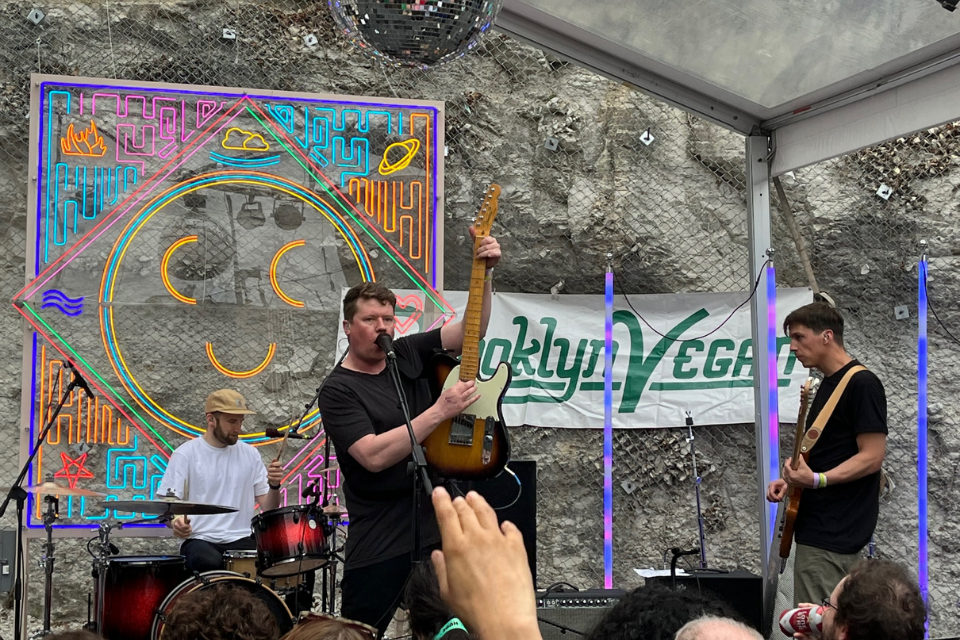 It was a heavy internal dilemma for, oh, perhaps 72 hours — where was my return to South by Southwest going to occur this year? On Thursday afternoon, I finally decided to cheer myself up a bit. There was no denying I needed it, and for adventurous, eclectic-minded South by Southwest goers, Brooklyn Vegan’s Lost Weekend shows at Cheer Up Charlie’s are as reliable as it gets.

Indie acts of all levels of notoriety are usually represented — veteran favorites, acts of modest fame, and the ones who are still at the top of the Cool heap because their first full-length is either brand new or nonexistent. Three years after the last live SXSW, hearteningly, those two days of Lost Weekend are still part of the equation. When in doubt about where you want to park yourself for a day party, head to Cheer Up’s.

Among the offerings on Thursday were strong performances from two UK post-punk acts representing either end of that spectrum — the new and cool kids, Yard Act, whose debut full-length is now a couple days shy of two months old, followed by We Were Promised Jetpacks, who formed nearly 20 years ago and have been recording for 13.

From its first loud notes, Yard Act projected an arresting, sardonic Brit-rock swagger. The Leeds quartet is full of bass-driven groove courtesy of Ryan Needham, restless early Clash-like guitar from Sam Shjipstone, and in singer/rhythmic talker James Smith, a frontman who usually obscures the meaning of his lyrics about as much as he hides his accent — that is, not at all.

As he is on that debut album, The Overload (which I’ve just finished listening to right now and am low-key astonished by), the sunglasses-clad Smith was game to churn out talky societal observations and character studies. “Rich,” about someone who becomes rich “almost by accident” and spends the song alternately defensive, insensitive, and self-loathing, was one of the band’s most intelligible displays of its affinity for classic punk subject matter. With Shjipstone strumming away, “Pour Another” echoed vintage Strokes in its raw, insistent guitar push. Their final song, “Tall Poppies,” on the other hand, was a 10-minute, slow-unfolding story song that works much better on the record (where it’s a mere six minutes) than on the Cheer Up’s patio, where it was easy to lose the plot of the thing. It was the only slight misstep in a set that left plenty of reason and hope for Yard Act to make headway in America.

The more classic indie-slanted sound of Scotland’s We Were Promised Jetpacks (top photo) made for a good chaser. WWPJ managed to get through its set more than credibly despite multiple members clearly having problems hearing through their in-ear monitors; vocalist-guitarist Adam Thompson, especially, seemed to be having that trouble essentially throughout the whole set. Opener “Human Error,” from 2011, set the tone, casting Thompson’s earnest bellow against a wall of anthemic guitar noise — the mode in which Jetpacks are most effective.

Speaking of which, Jetpacks’ best known song, the hard-charging and interpretation-open “Quiet Little Voices,” had an extra kick to it because of what the band didn’t do: The “oh, ohh-ohh oh” backing-vocal chants on the chorus that helped give that 2009 gem its hookiness. There was no tiresome hold-the-microphone-to-the-audience move, but more than enough audience members were familiar with “Voices” and could fill those in themselves, and that’s exactly what happened. Even at a small venue, with the band hammering away, it was audible  — and a kick to participate in.

Leaving us on this overcast day with the dynamic-shifting, escalating “It’s Thunder and It’s Lightning” — in which Thompson’s bellow appeared to crack unintentionally in the climax — Jetpacks left a strong impression. The United Kingdom always has been, and always will be, a prolific exporter of fine rock music of all genres and subgenres. Handed something of a postpunk mini-flight during that first day of Lost Weekend, Cheer Up’s audience was lucky enough to taste two very different flavors.