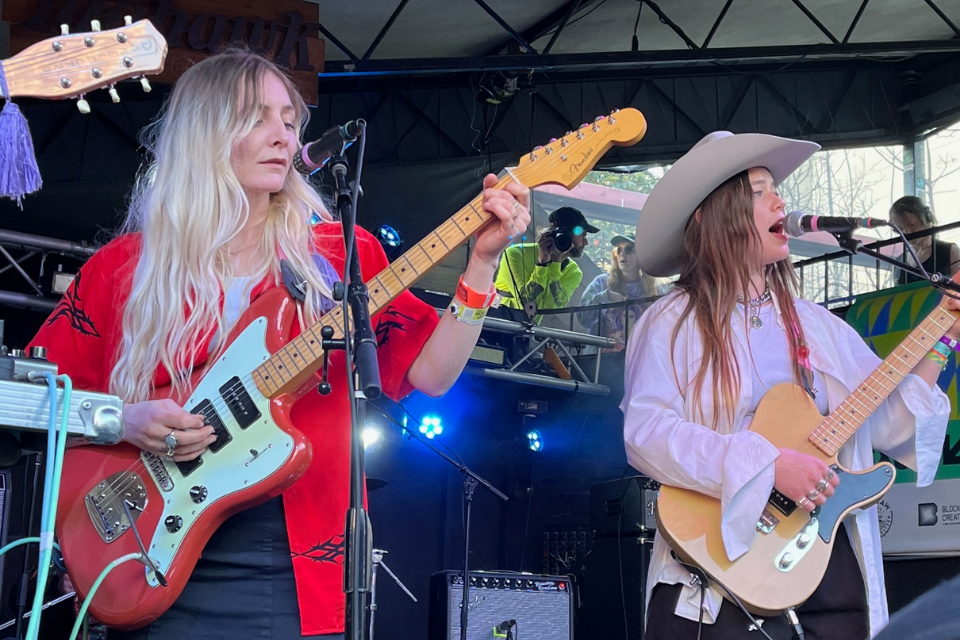 On Thursday, just as my South by Southwest 2022 music experience was getting started, I got notice from Spotify that I was a piece of pioneering music history. It seemed Cardi B and Megan Thee Stallion’s “WAP” had reached Spotify’s Billions Club: one billion streams. And I — being a goddamn tastemaker on the ground floor of all things that reach the top — was in the first 3% of those streams.

Me! The first 3%! And Spotify’s app commemorates your early interest in a massive hit with a bomb little screen you can then share on social to brag about your accomplishment. Just like the T-shirt, or novelty crown, or whatever you get, when you win a regional restaurant’s famously gluttonous food challenge.

Three percent of a billion is 30 million, so you can see why I immediately found this “milestone” hilarious and absurd.

Yet, after seeing Wet Leg headline Mohawk’s SXSW afternoon party a day later, in front of a packed house, I found myself wondering: Am I in the 3% club for the first billion people to see Wet Leg live, a number the Isle of Wight duo has undoubtedly not reached yet? I’ll bet I will be. What if I’m in the first 10%? Twenty? Damn it, Spotify — stop putting me in the mindset of your marketing department.

Anyway, I did see Wet Leg, along with hundreds of others. And knowing they were an option, checking them out now was almost a prerequisite for me having a satisfying 2022 SX experience. In fairly remarkable time, Rhian Teasdale and Hester Chambers have detonated the indie scene on the strength of two exquisite, witty, and riffy post-punkish singles: “Chaise Longue” and “Wet Dream.” They closed out the day party with a lead-in from Best Coast, which has been at it for over a decade and undoubtedly has more general name recognition. They still don’t have a full-length out until April 8. Basically, to be seeing them now is to be on the breaking wave.

And although I can’t call Wet Leg the best performance on the bill (more on that honor later), they didn’t disappoint. They managed to surprise me during a half-hour set that was a little ragged, a lot rocking and a ton of fun. The biggest surprise was just how much fun the band wasn’t afraid to show it was having. This is post-punk, after all.

Granted, there are clever smirks all over “Chaise Longue” (which quotes “Mean Girls”) and “Wet Dream” (which places the narrator most awkwardly into the headspace of a guy having a wet dream to her). But there aren’t constant smiles and laughs — which is what lead vocalist-guitarist Teasdale, going against genre somewhat, was all about onstage.

Seeming a touch shy toward the crowd, the cowboy hat-clad Teasdale was nonetheless one of the smiliest, laughiest performers I’ve seen lately, directing her cheeriness toward Carpenter (on guitar and backing vocals), fans, and the three players filling out the live act on keyboards, bass and drums. At times, like on opening song “Too Late Now,” she was smiling and laughing so much, she appeared to be on the verge of “breaking” just like “Saturday Night Live” cast members do. She never really did, even though she got inconsequentially tongue-tied at the end of “Chaise Longue” to close the set out.

Each of the nine stripped-down songs hit their mark overall, whether on the powerful rush of “Wet Dream” or the more primitive comment on phone culture, “Oh No.” When “Chaise Longue” began, I didn’t think I needed a phone video excerpt of it for Ear Traffic’s social media; everybody with even a passing interest in indie radio knows that song right now. But Chambers’ guitar tone on the song’s signature break — full, clear, and electrifying — changed my mind, and out came the phone.

The smiles were the secret weapon. A young post-punk band that doesn’t take itself too seriously is likely to distinguish itself from the pack before it even has the tunes to do so. Wet Leg is doing it on both counts, and was a blast to watch live as they rise.

Professional and focused, the onstage quartet crisply stampeded through a well-selected slate of Cosentino’s best and most recognizable songwriting offerings — the early, beach-fuzz stuff like “Crazy for You” and finale “Boyfriend,” the summer car pop-rock of “Feeling OK,” and the Joan Jett-reminiscent arena-rockish memoir “Everything Has Changed.” The playing and Cosentino’s singing were note-perfect.

Wearing a shirt touchingly dedicated to her recently departed late cat, Snacks, the ever-relatable Cosentino mourned his loss and expressed appreciation for the emotional support social media has given her in the wake of his passing. She also made sure to “use my platform” to speak out against Texas’ recent headline-grabbing laws and encourage fans to keep pushing for equal and reproductive rights. Soldiering on for more than a decade (according to her, Best Coast’s first SX was the year their first album dropped in 2010), Cosentino has endured personal trials and vacillating public opinion among music critics and snobs about the value of her songwriting. It’s fortunate she’s still part of the rock universe and in the SX orbit.

Ritt Momney
Given that I’ve never fully embraced Ritt Momney’s best-known song to date, enjoying his afternoon performance as much as I did was a surprise. The mustachioed Utahan with the baseball cap squished down by headphones had a lot more to offer live than what he gave the world with his 2020 cover of Corinne Bailey Rae’s “Put Your Records On,” one of the greatest easy-listening R&B singles of all time. Momney (real name Jack Rutter) made the song his own, which is usually job one for a cover. But his languid, falsetto-laden electronic indie pop spin on it doesn’t get in the ballpark of Rae’s kick-back-and-feel-good masterpiece. A whole set effectively in the same stylistic realm as Ritt’s take on “PYRO” could’ve been disastrously sleepy.

Instead, Momney was darned good. He showed varied indie-pop chops, rousing dynamic shifts and an understated stage flair whether parked at his keyboard or getting to his feet when he only had vocal duties. “Put Your Records On” was fine, but out of the six or seven songs in the set, it might’ve come in fourth. “Sometime” and especially “Set the Table” were invigorating head-bobbers, and opener “HEADSTART” had electronic flourishes to spare and fine singing from Rutter, making it arguably the best performance out of the relatively downtempo stuff.

Goes to show, don’t judge an artist solely by his hit cover. You might miss out.