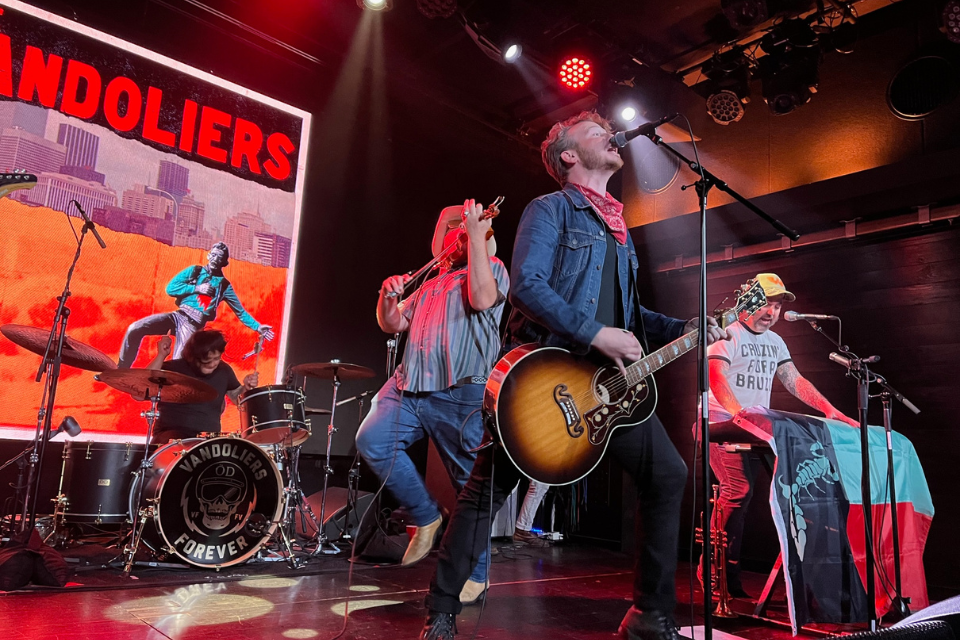 Pretty much as soon as Vandoliers began playing Thursday night, I thought about when the last time was that I’d heard anything that could be described as “cowpunk,” or even heard the term. Even in this musically diverse (and fragmented) world where someone somewhere is playing any type of music and you can pretty easily get wind of it, cowpunk — as it became known in the ’80s — is seemingly rare. You just don’t come across a lot of in-prime artists who stir up the alloy of punk and traditional country that was the hallmark of Just Say No-era college favorites like Meat Puppets and Jason & the Scorchers. Why it’s so scarce these days is a bit of an interesting question, in light of how many indie artists with fully realized trad-country leanings (Angel Olsen, Waxahatchee) are having a serious moment.

But cowpunk — albeit with a sometimes more pop-punkish spin than their forebears — is unmistakably what Vandoliers are, splitting the difference between the two parent genres with the precision of a paper-cutter. And the Dallas-originated sextet’s energy on the 3TEN ACL Live stage Thursday was enough to melt away any potential objections from someone who likes one of those genres but hates the other. (If you hate both, you’re probably SOL with Vandoliers.)

It certainly seemed like frontman Joshua Fleming must’ve been sweating before he ever appeared onstage. At any rate, sweat began flying from his head not long after the band’s first notes on the Mellencamp-y nostalgic-regret singalong opener “Every Saturday Night,” off their new, self-titled fourth album, and there was a lot more where it came from.

Fleming is one of those earnest, head-angled-to-the-sky live performers, punching through his songs with a nasal rasp that might draw comparisons to some of the early-’00s emo-punk-pop bandleaders if it didn’t carry a distinguishing raw, earthy sharpness. Giving off a young Charlie Daniels vibe, sunglass and cowboy hat-clad fiddler Travis Curry is one of the more ambulatory live performers on his instrument I’ve seen, marching and grooving as he carries much of the load on the fostering band’s Texas dancehall vibe. But cowpunk isn’t the only subgenre Vandoliers invoke. Thanks largely to Curry and trumpeter Cory Graves (who also handled keyboard duties), the band variously echoes the Celtic punk of Dropkick Murphys (whom they’ve toured with), ska punk (like “Troublemaker” and “Sixteen Years,” one of the more anthemic performances), and even mariachi music on “Too Drunk to Drink.”

Some of the best numbers had little or no hint of punk to them: “Cigarettes in the Rain,” perhaps their best-known song judging by Spotify plays, was affecting, ballad-y country-rock incarnate, while “Bluebonnet Highway” represented the uptempo spectrum of that same zone. While seeing a cowpunk band ply its trade might carry a novelty to it these days, Vandoliers sold it live thanks to musical versatility, sweat (the literal kind) and blood (the figurative kind, with Fleming and band bleeding palpable passion for playing in front of people).