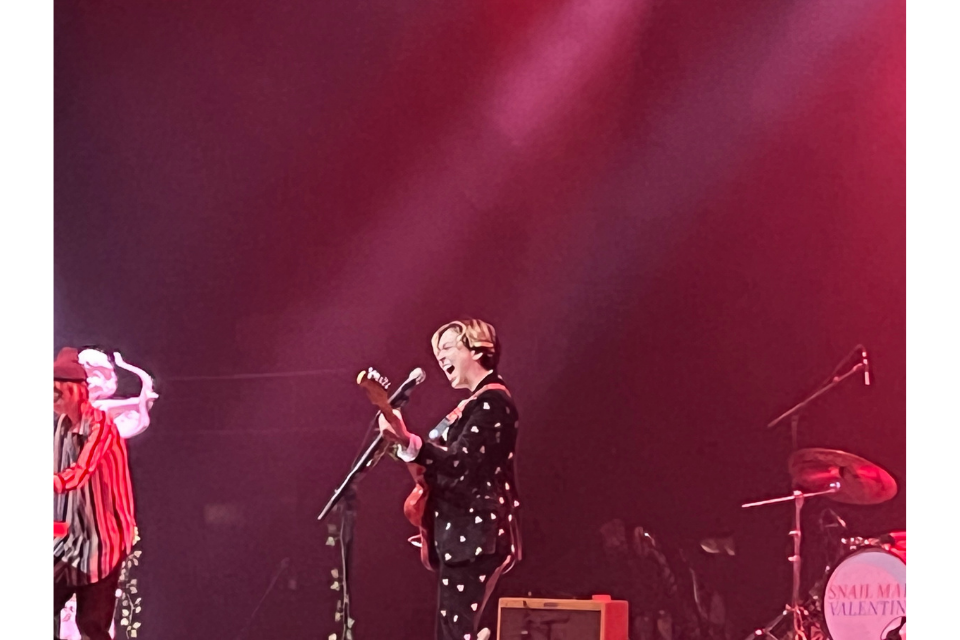 “You guys wanna know something crazy? We’ve never played a bad show in Austin,” Lindsey Jordan — aka Snail Mail — told fans early in her show at the Moody Theater on May 2. “I feel like we’ve played in Austin like 12 fucking times. Never had a bad show.”

Then Jordan and band made it 13, and she looked like a full-fledged rock star doing it.

Riding high off on the strength of the best records of the past year — Valentine, her second full-length — and going all-in on that theme with modest Cupid-y sculpture stage decor, Snail Mail was locked in for the hour and 13 minutes or so that she played. Jordan’s moody and painstakingly well-worded college-rock gems both augmented and cut through the relative darkness of a no-taping Moody Theater show. This was a new experience for me, incidentally; all of my ACL Live experiences have been show tapings, the Austin Music Awards, that sort of heavily lit, self-vivifying thing. This any-ole-night version of Moody was shadowier, dive-ier. Seeing no “Austin City Limits” skyline backdrop was a modest disappointment. It’s a setup that requires performers to supply more of their own energy to make the show feel special.

The opener, Goon Sax, didn’t have a particularly large crowd out for its set, and I wondered if the Monday night scheduling might have depressed turnout. And perhaps it did somewhat — but it also appeared that by the time Snail Mail appeared onstage, the floor population might have doubled. New mezzanine spectators materialized, too. And the 22-year-old Jordan, veteran of like 12 fucking Austin appearances, had everyone in her grasp with her musings on love and frustration.

Wearing a dark jacket-and-pants combo that would’ve been superstar-quality apparel about anywhere from arenas to the Opry (I couldn’t make out the pattern on it, but I’m sure it was whimsical), she opened boldly with Valentine’s title track, her strained face on the anthemic, crank-it-up chorus leaving no doubt that the pathos of “Valentine” lives within her. Many of Jordan’s performances, like this one, appropriately cast her as a slow-burning fuse pulling back on her own reins, barely stifling a full-release scream. With guitar strapped in, she’s a confident, subtle, natural strutter, and at several points, her comfort as a banterer was on display. “Are you predicting my next move? You aaaarrrre?” she said to fans at one point, before conceding that they were right in seeing her guitar change and diagnosing the song she was about to play.

And all those performances were good to excellent. Fairly early in the set came a sharp-edged rendition of first-album gem “Heat Wave” that Jordan and her band played the hell out of. (Probably an unpopular opinion: “Heat Wave” is the best song on debut Snail Mail album Lush, ahead of “Pristine.”) The beautiful ballad “Light Blue,” of Valentine vintage, just required Jordan and an acoustic guitar onstage. When she announced the band would be playing a cover, I was soon surprised to discover it was … wait, what the hell was it? It wasn’t something I’d heard covered before, but I knew it was a song I had heard a zillion times at some point in my life.

Finally, after hearing the chorus line “I just wanna sleep it off with you” for about the third time, it hit me: Superdrag! Yes, with “Feeling Like I Do,” Snail Mail had pulled a song from a college rock dinosaur few people remember anymore, off an album that no one ever talks about (2002’s Last Call for Vitriol) that I just happened to play to death for perhaps the entire year after it came out. What a pleasant, unforeseen blast from the past, and Jordan made the song Snail Mail’s own.

Closing a two-song encore with “Pristine” might’ve been entirely predictable — she’d already played everything else that would’ve made sense to wrap it up — but it was entirely satisfying, too. The self-conflicted classic of recent indie yore was even a little danceable as performed, and some of the floor crowd obliged.

Arguably the key line in “Pristine’s” rather mesmerizing onslaught of poetry is when Jordan sings, “It just feels like the same party every weekend/Doesn’t it?” It’s likely going to be awhile before any discerning listener says that about Snail Mail. Jordan broadens her horizons on Valentine, still has plenty of places she can go with her music, and she proved at Moody that when she throws a party, it’s not going to feel like all the others.