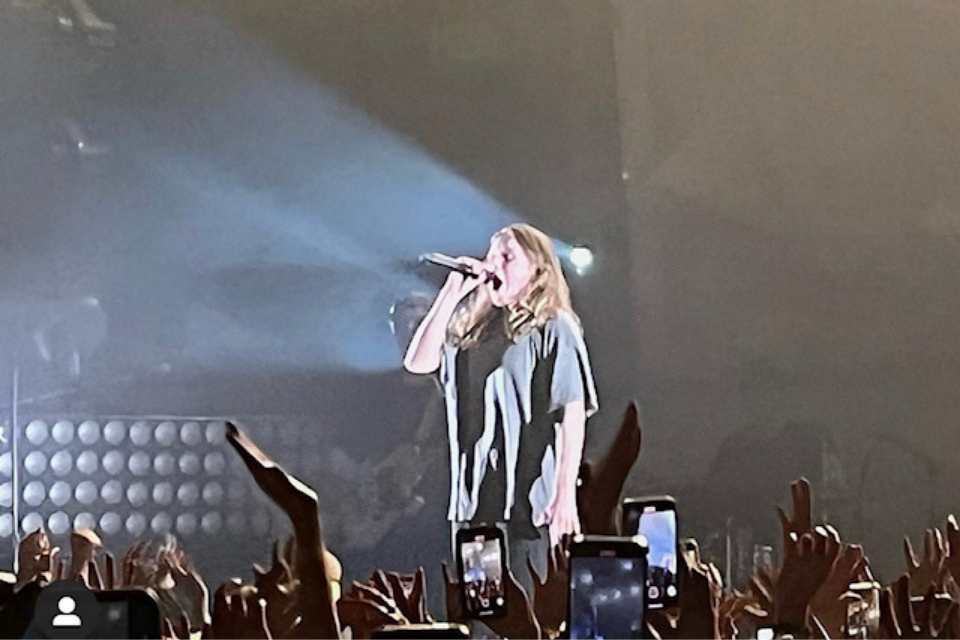 During ACL last fall, I noted that Marie Ulven isn’t literally a girl in red. But – and this can’t be overemphasized enough in understanding Ulven’s appeal as a live performer – she’s not a figurative girl in red, either.

As the name of an artist, “girl in red” connotes mystery. Intrigue. A cryptic smile here, a dreamy look there, perhaps pushing everything around her into shrouded darkness. Ulven herself, onstage, is none of that, as she once again displayed at her sold-out show March 31 at Emo’s.

In reality, Ulven is a jumpy-minded, oversharing, hilarious hoot, a burgeoning queer-music icon-in-progress with a devil-may-care approach to … let’s say, to sounding like she has any idea what’s going to come out of her mouth at any given moment. But when it was time to play one of her uncommonly deep collection of affecting and well-written songs for a 23-year-old, Ulven was focused and on point, earning the delight she coaxed from the predominantly young, overwhelmingly female crowd.

Opening with the rip-roaring “You Stupid Bitch,” a Charli XCX-meets-Paramore pop-rocker, Ulven was off and running both musically and mindfully. Musically, her and her band’s transitions were seamless. One minute, she can easily hammer through a regretful-hookup rocker like “bad idea!” The next, she’ll settle comfortably into the dream or bedroom pop of “we fell in love in october” or even pull a bit of a surprise out of her baseball cap, like her acoustic-guitar solo performance of “I’ll Call You Mine.” And while red isn’t part of her wardrobe, it was the predominant color of her backing stage lights, adding effect to the alt-rock megahit “Serotonin” until she dance-drifted into relative darkness in the song’s outro.

But “seamless” comes nowhere close to describing the stage presence. Reviewing Ulven’s show with just a passing mention of her verbal stage antics would be doing her – and you – a disservice. There’s a complete package to, well, unpack here, and the hilarity of this young Norwegian thought tornado is part of it.

Say you’re a musical performer onstage, and someone yells the fairly recent-vintage, jokingly sexual come-on “Sit on my face!” at you. How would you react? Ignore it? Laugh? Make a joke about waiting until after the show? Or would you warn the crowd that no one would want that from you, because your period came recently? The latter is what Ulven went with, and … yeah, that’s girl in red’s stage banter in one anecdote.

There was a rather bizarre moment where Ulven received a hexagonal work of art from a fan in the crowd – reminiscent of an old-school Domino’s pizza box – and asked everyone what that shape was called. What followed was a seemingly interminable period of time where the audience helped her out and she couldn’t seem to pronounce it correctly; “ex-uh-gone?” she said at one point, trying one or two other variations before finally enunciating, “Hexagon?” and getting a cheer. Given that she speaks and sings fluent English, and wasn’t trying to master the hardest or most obscure word in the language, the moment was inescapably strange.

This random sampling of Ulven quotes I was able to quickly transcribe in the Notes app on my phone is pretty representative of her multitudinous, funny mind and the general goings-on:

– [Responding to an apparent request yelled by an audience member] ‘Help me come out’? Are you bi? … I can tell, you know. My girlfriend – all my girlfriends have been bi.”

– [Improv’ing lyrics to the tune of “I’ll Call You Mine” after the crowd gifted her a cowboy hat and a bouquet] “I’m in Texas, I got a new hat/Flowers in my armpit, might get a rash.”

But she can turn serious, too. As many performers are doing these days, Ulven acknowledged and condemned the controversial laws being passed in Texas and in Florida, with her mention of the latter state prompting a chant of “We say gay!”

Even as she emphatically doesn’t carry the too-cool-for-anything aura her name might imply, Ulven is so many other things – insightful and emotionally bleeding songwriter, community galvanizer, and charming court jester. Her shows leave you impressed, smiling and satisfied.

Holly Humberstone
Whereas girl in red has a full crew of dudes behind her, Holly Humberstone – another young and climbing European talent – was all by her lonesome in her half-hour opening set. It was just her, the two guitars and keyboard she shifted among, and a drum machine. Humberstone, even younger than Ulven at 22, impressed with palpable vocal investment in her sweet melodies and heart-is-bare lyrics. She said fairly little to the crowd, but said plenty through her songs.

The magnificent “The Walls Are Way Too Thin,” joining a couple of girl in red entries as one of 2021’s best songs, was predictably the closer and highlight. But other performances rivaled it. New ballad “London is Lonely” showcased both the sensitivity of her voice and its textures, and “Scarlett” (even heavier on the ’80s-y synth-and-drum programming live than on record) displayed her clever lyrical touch (“We go together like bad British weather on the one day that I made plans”).

Like Ulven before her, Humberstone seems to be in the very modern career process of spending years churning out a shit-ton of singles (and an EP) before she gets around to recording a proper LP. Whenever she does get to it, it’ll be worth looking forward to.