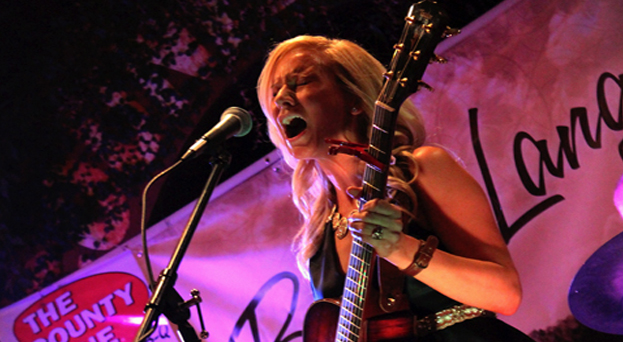 Three albums into her musical partnership with guitarist Maurice Munter, San Antonio singer-guitarist Bonnie Lang says the duo has finally arrived at the sound that exemplifies who they are.

And a good representation of that sound on Lang’s newest album, The Road Is Wide Open, lies in one of the song titles: “Smooth As a Glass of Whiskey.” Musically, The Road Is Wide Open – Lang’s fourth album overall, including one effort before she and Munter got together for 2011’s I’m Here – goes down easy.

Lang, Munter and an accompanying bassist and drummer celebrated the release of The Road Is Wide Open with a show at The County Line BBQ in San Antonio on Oct. 17, offering about two hours of the evenly blended country rock that populates most of the album, with a few covers thrown in.

“I just feel like we really found our true sound,” Lang said. “I think the first and second CD, we were basically testing the waters. But this CD, it’s funny, because instead of trying to be anything, we let the songs just fall into place. … We just let them become what they are.”

What they became for The Road Is Wide Open were a group of tracks with country, roots rock and pop inflections, but without amp or twang overload. “We’re Gonna Have a Good Time” is straight-on rockabilly in a Carl Perkins-ish vein; “Better Let It Go,” the ballad that follows the opening title track, even throws in a discernible swing feel; “Smooth as a Glass of Whiskey” is smoky honky-tonk.

Lang and Munter came together with disparate musical inspirations and backgrounds. Lang grew up listening to the Judds and Sheryl Crow, while Munter had more classic rock in his roots. But their collaboration immediately brought some local success. The first song they cowrote together — “Desperate,” a track off I’m Here – earned airplay on Texas stations. They followed I’m Here with 2013’s Where Have You Been.

“He was a classic rock guy, I was a country girl, and it’s really all come together beautifully,” Lang said.

She has a little classic rock in her own blood, though. Lang’s shared the stage with country acts such as Mark Chestnutt and Kevin Fowler during her career, but she says one item left on her bucket list is someday to open for ZZ Top. In fact, inspiration for “Better Let It Go” came from the Top – she wrote it as an answer to the group’s 1979 track “A Fool For Your Stockings.”

Though Lang plays most of her shows around the San Antonio area, she’s looking to perform more in Austin, and she and Munter played a covers show at Hill’s Café last Fourth of July weekend.

For more on Lang’s music and showtimes, check out bonnielang.com. Check out photos from Lang’s CD release party in San Antonio below, and listen to “Desperate” here: