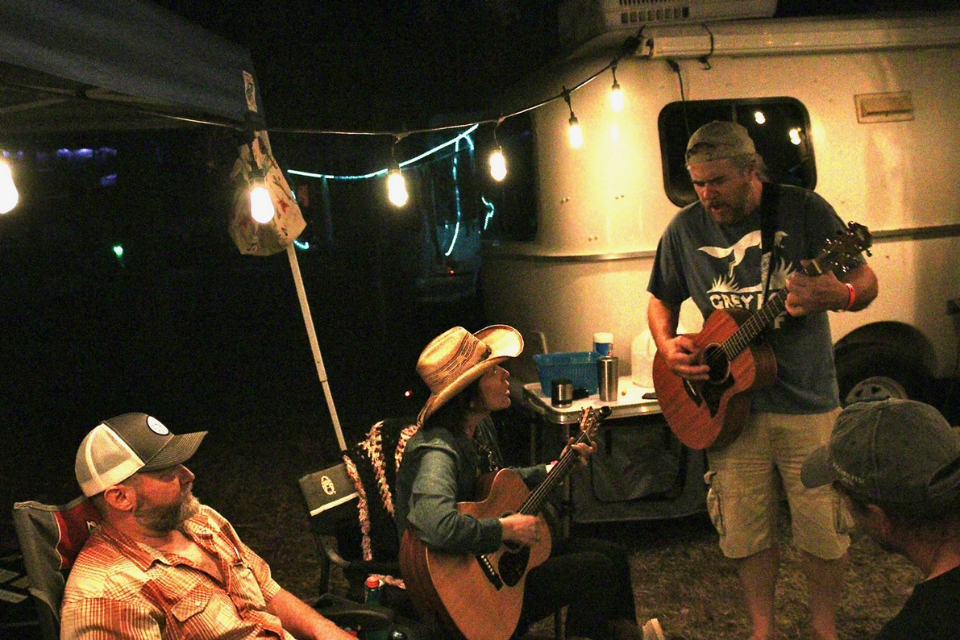 (CAMP BANJO, TILMON, TEXAS) – New Orleans-based chanteuse Maggie Belle crooned her last note close to midnight on the opening day of the 2022 Old Settler’s Music Festival. The lights went down, her five-piece band began packing up their gear, and the audience began to drift away.

Many in the crowd didn’t have far to go. The stage is tucked among the cedar and mesquite in a corner of the festival’s liveliest campground. And one of the event’s chief attractions — which, at least once in the past, has been an early showcase for future music superstars — was just about to begin.

“It’s what I come for,” said one smiling, toe-tapping middle-aged lady.

Across the crowded venue, jam sessions popped up and blossomed like the desert after a downpour. Guitars, banjos, dobros, mandolins, fiddles – just about every kind of wooden instrument whose strings can be plucked, picked, strummed, or bowed – appeared from cases and tents.

Traditional folk songs and blues numbers dominated the playlists under the stars. But this writer heard more than a few acoustic Grateful Dead covers and even a rendition of the Rolling Stones’ “Dead Flowers.” The honor of choosing the next song proceeded in an unwritten but genial code, a round-robin among the players.

Each gathering seemed to coalesce into a similar configuration. The busiest artists, those who led the way through every tune, sat or stood in the center. Next came a sprinkling of background vocalists and musicians who contributed quietly or offered up just the occasional flourish. Tapping, nodding, and swaying spectators made up the outer ring. Wandering strangers received warm welcomes.

Every available open space in Camp Banjo — said to be three-and-a-half acres, but it seemed bigger — was occupied by everything from immense RVs to classic, silver Airstreams to simple tents.

Campers had obviously made meticulous preparations for their spaces. They strung up tie-dye and mandala tapestries to create billowing walls. They decorated their sites with banners and streamers, rugs, couches, tables, blinky lights, and even a pair of hanging geranium pots. Grills and camp stoves produced late-night snacks or waited to sizzle bacon, sausage, potatoes, and eggs for tomorrow’s breakfast.

Lee Thompson, a guitar player formerly from Austin now living in Oregon, is a longtime Old Settler. The after-hours camaraderie is an important part of making the festival what it is, he says.

“Some people need music. They don’t want to make money at it, but they need it in a deep way,” Thompson told me the next morning. “They just want to be around people who also need that. And you find ’em here. It kind of boils the fat away. If you really want to play music, come do it here.”

The quality of the campground talent varies tremendously, from earnest novice to true virtuoso. The family-friendly festival has always attracted young players with obviously bright futures.

Thompson recounted a memory from the second Old Settler’s Festival in 1988. “A family came out of their tent, they had some coffee with me and then two little kids came out, 12 and 14,” he said. “One had a fiddle; one had a banjo. They tuned up and then just started ripping.”

Not many years later, those two sisters, Emily and Martie Erwin, became known as the founding members of the Dixie Chicks, now known as the Chicks.

“You can’t bottle it,” Lee’s brother Jay Thompson, of Dallas, says of the campground mystique. “It’s got its own flavor.”

This writer fell asleep well after 2 am, listening to the Thompsons and their friends, plus a few other groups of pickers in the immediate neighborhood.

It was beginning to grow light when I lifted my head from my pillow. Somewhere not far away, I heard one lonely guitar competing with a crowing rooster to welcome the dawn.