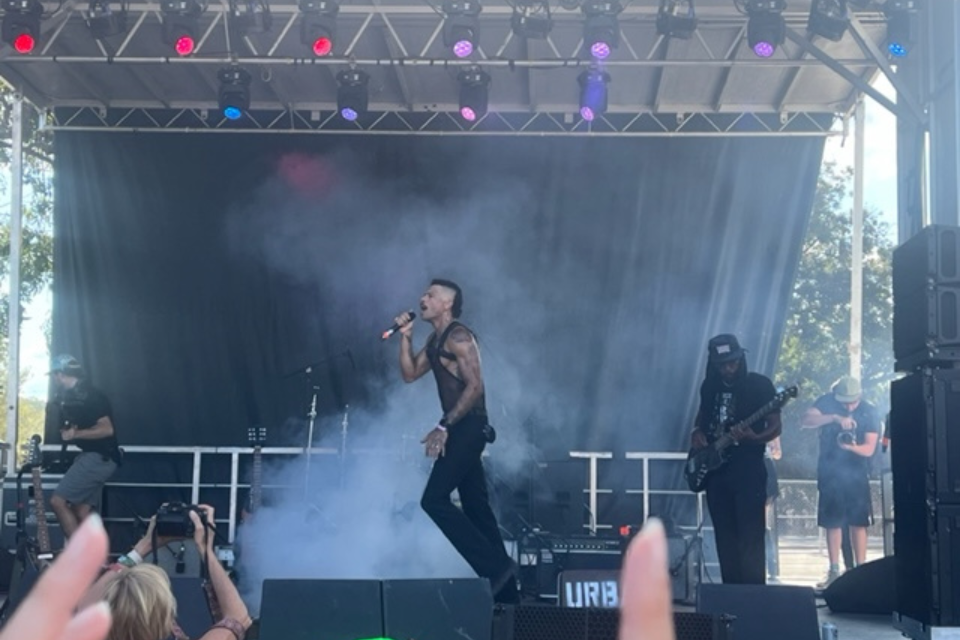 Usually, when you interview local musicians at Austin City Limits Music Festival whom you know to be playing their first ACL — like longtime local Jonathan Horstmann — it’s an easy, early warmup question soon after you sit down. Some variation of:

I assume you’ve been to ACL a time or two before. What it’s like for you as a townie musician to be here as a performer?

Maybe you get a fun memory of ACLs past, or maybe you just get a boilerplate spiel about how cool it is that isn’t even worth turning around to your readers. But what’s unlikely is that you get the answer Horstmann — now the frontman and mastermind behind Urban Heat — gave at the festival, particularly when it’s someone who’s called Austin home for about 17 years.

Horstmann had never been been. Not once.

“I’m bad with crowds,” he told me in an interview at Zilker Park the day before his set. “It was always like, ‘I want to go to ACL someday, but it’s only going to be when I’m playing.’ So when I found out we were going to play, I was like, ‘I get to go! I can handle it!’ Because I’ll have a space where I can go hide.”

Ask him about that aversion to something most musicians live for, and Horstmann will bring up the mental health conditions he’s been diagnosed with — the same ones that are feeding his songwriting for Urban Heat, a synth-charged, broadly post-punk trio churning with dark ’80s heaviness.

Type 2 bipolar, OCD and ADHD are all pieces of Horstmann’s makeup — the type of struggles that can be crippling and debilitating if left untreated, but a fertile source of art if addressed and harnessed. Horstmann is impressively building Urban Heat’s following on his ability to tap that source — and, as the band’s Sunday set at ACL Weekend 2 showed, on being able to set aside his fear of being in crowds in favor of performing electrically in front of one.

Urban Heat’s first non-single release, last summer’s EP Wellness, surges, stirs and crackles with the emphasis on self-discovery evident in that title. There’s a sort of subtly heavy, noir journey-of-the-mind thing going on through much of those six tracks and 20-plus minutes. “Trust,” for example, punches the hardest disillusionment buttons that — let’s be honest — reside deep within us all (“When we were young the future was bright/No one told us we were buried alive/Now we aspire just to barely survive/Trapped in a box, searching for light”) and vaguely recalls the Sex Pistols with a “no future” chorus. “Have You Ever?,” the standout of the six and perhaps Urban Heat’s greatest track to date, repeatedly asks its title question in relation to getting the emotional rug pulled out from under you (“Have you ever found your sense of self/Just to realize you’re being someone else?”) over the kind of insistent synth riffage that stands toe to toe with traditional guitar rock.

Foremost inspired simply by sounds — white noise, for example — Horstmann took a path to ACL that was perhaps a long one by Austin musician standards. Moving to ATX from Lompoc, Calif., in the mid-’00s, he earned a local reputation through his work in several local bands, including punk trio Blxpltn. He joined with Paxel Foley and Kevin Naquin to form Urban Heat in 2019, releasing a string of singles (one anthemic standout: the apocalyptic “A Simple Love Song”) before Wellness dropped last July.

Knowing how integral a search for mental wellness has been to Urban Heat’s output — and as a longtime anxiety, uh, manager myself — I can’t help but ask Horstmann if he’s willing to share any specific moments in his life related to his mental health struggles that have helped shape his music.

After a long pause, what he comes up with unwinds an interesting piece of advocacy for a specific sub-segment of our population.

“As I’ve gotten the opportunity to focus more on music and focus more on my creative work, the to-do list is kind of building. Because I also still have a day job, and so, I get overwhelmed with all these things and just kind of shut down,” he said. “And then stress is a really great motivator for me, so then when things get to the last second, that triggers a manic episode where I’m super-fucking productive, but beyond what I need to be, and having to figure out and learn how to — because you still have to exist in this world where you’re interacting with other people, and it’s not all about what’s going on in your head.

“I’m sure it has to affect the music. I don’t know if it does in a very conscious way as much as just the way that the music’s sort of made.”

Oh, man. Hearing this ascending artist open up about his last-second super-fucking productivity might just give a few people the courage to stand in defense of their own procrastination, might it not? And when Horstmann elaborates further, his worldview — and a window into his music — become even clearer. Married with children ages 4 and 2, he has a perspective on defending personalities like his that stretches beyond a recording studio.

“I feel like we’re switching to a society that understands neurodivergence a little bit more, and where we’re understanding that procrastination is not a moral downfall for people,” he said. “It’s just our minds work differently, and we have different motivations for getting things done. I think that’s really important — especially like raising children and things like that — I think it’s really important to not have anyone feel less-than or somehow morally fucking corrupt, or like they don’t have a good work ethic because their minds work different than [whoever], because they’re not really great worker bees. You know what I mean?

“The whole narrative is just around productivity for productivity’s sake — normally to make somebody else money, too. It’s not even like working for yourself. It’s like you’re supposed to have a good work ethic so that the machine can keep on rolling. Maybe it’s OK to just fuck off until you absolutely have to get something done. That’s all right!”

As for that aversion that’s kept him away from ACL for so long … well, when he was onstage at Zilker, Horstmann betrayed his fear of being in a crowd so much that at times, his lean, muscular stature and ranging, single-armed crowd engagement brought Freddie Mercury to mind. When he had a guitar strapped on him, I even had Prince on the brain. Urban Heat’s live set pumped with an inviting energy that in no way suggested the man at the center of it would need a place to hide from all this once he was done.

At one point early in the set, with the late afternoon sun backlighting the BMI stage, smoke blowing straight out from it and my promotional sunglasses giving me what I paid for them (nothing), Horstmann was completely obscured; I couldn’t make the guy out at all.

Luckily, the more Urban Heat is putting together music, and the more Horstmann is letting us all in, the less that’s the case the rest of the time.

“More so than moving the conversation [about mental health], I just hope that the individuals who are connecting with it can find some comfort,” he said. “I didn’t know that our music would have that sort of effect on people. The way that fans have reached out with like, ‘This has really helped me through a hard time,’ etc., like that, that’s been really kind of eye-opening, and a reminder of the power of music.

“I think it’s cliche, and we take it for granted, but this shit’s powerful. We’re really blessed to be able to be these channels for whatever messages are trying to get out there.”