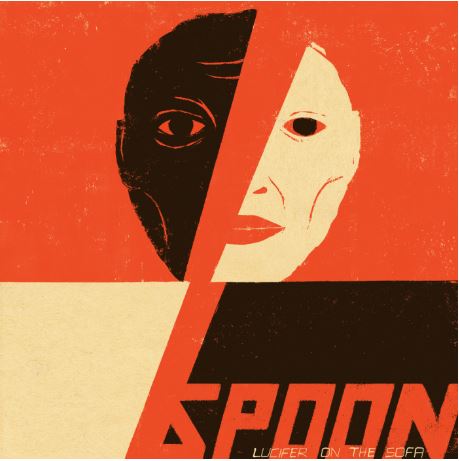 Britt Daniel is 50 now, about to be 51 pretty soon. And it’s hard not to look at that age, for an indie rock legend/general rock should-be-legend, and wonder how much he and his otherworldly band have left in the creative tank. That was a personal backdrop of sorts for awaiting and diving into Spoon’s 10th studio album, Lucifer on the Sofa, because let’s be honest with ourselves: Historically, a band continuing to churn out fine new rock when it approaches or exceed AARP eligibility is pretty rare. Sometimes, the attempts can even seem a touch sad.

Consider the Voodoo Lounge-era Stones (the tour, incidentally, that included my first concert attended by choice), when they were in their 50s and trying to sell that they still had it, through trite uptempo pablum like “You Got Me Rocking” and “Sparks Will Fly.” For another, consider Pearl Jam “fight[ing] to get it back again” on “The Fixer,” by which point they were in their mid-40s and perhaps sounding a little bit desperate to make a big rock statement. (“World Wide Suicide,” from a few years earlier, fits this description as well.)

So Daniel’s 50, cofounder/drummer Jim Eno is 56, and on top of that, the band’s new output since its last classic, They Want My Soul in 2014, has been at least a modest comedown. Hot Thoughts — now, somehow, five years in the past — was good but nothing special. “No Bullets Spent,” a one-off 2019 single from their best-of album, was an OK but forgettable rocker, fairly typical token-new-track-for-greatest hits-album fare. Does Austin’s greatest indie-rock band still have it?

The answer, most fortunately, is yes. While not a stone-cold classic, Lucifer on the Sofa is essentially the record Hot Thoughts could’ve been. Where Thoughts was a transitional record where Spoon took one foot out of the angular, postpunk-rooted indie that’s made them famous, Lucifer completes the transition to a more mainstream classic rock sound. Un-miraculously, that’s not a bad thing; it’s just different.

Exempt from that observation is “The Hardest Cut,” on radio since late 2021 and a Billboard Alternative Airplay chart-topper. If this LP is a souped-up Hot Thoughts, then “Hardest Cut” is a supercharged, spiky upgrade on “No Bullets Spent”: a hard-charging, garage-fueled social commentary where Daniel and Spoon do what they’ve always done best: find a repetitive, angular instrumental hook or two with addictive properties and pound it into your auditory pleasure center. Between the song’s relentless drive, Daniel’s classic not-fully-direct-lyricism, and his messy-nasty guitar solo, the track lives up to its name and stacks up as Spoon’s best song since the most magical moments of They Want My Soul (“Inside Out, “Rent I Pay” and the album’s title track).

The rest of Lucifer’s best, though, largely settles into a stylistic zone of Good Rock Music the likes of which we’ve collectively enjoyed for approximately 50 years. Opener “Held” is crunchy blues-rock vulnerability, building to an explosive middle section as Daniel says a lot about letting go without using too many words. “Wild,” cowritten with Jack Antonoff, is underpinned with urgently throbbing guitar work and piano that set the stage for an anthemic climax.

Even facially “been there, done that” titles like “Feels Alright” and “On the Radio” bring both rocking thunder and Daniel’s unique perspective to what could be trite subject matter. Ten years after a big-time pop band curiously recorded a hyperpolished, nearly intolerable song about that relic known as a pay phone, how do you write a fresh tribute to the radio in 2022? Britt manages to do it — again, by leaving a lot of directness (in this case, explicit adoration of the radio) out of his lyric.

The album’s less compelling moments are the ones where Spoon turn to their softer side. For example, Daniel hasn’t made his bones on (relatively) straight-up rock love songs, and while there’s nothing wrong with “My Babe,” exactly, it doesn’t hit the emotional bullseye it strives for. But on an album that gives you a bunch of fastballs, the closer, “Lucifer on the Sofa,” is a swanky and satisfying final curveball. It’s an atmospheric, night-at-the-lounge number (smooth saxes and all) that shouts out Lavaca, Dale Watson, West Avenue, and “those blackbirds” that “make their noise,” which I can only presume is a reference to our relentless grackles that have no boss. It’s a song about being lonely and left behind, but one that name-checks our city in a way that, intriguingly and somehow, just fits. This album marks the first time Spoon has recorded back in Austin in a long time, and they’re ending here by letting us know their roots are still front of mind.

Given the history I cited above — e.g., your Pearl Jams and Stoneses — seeing local rock royalty aging this gracefully is heartening. It helps Spoon the most, perhaps, that Daniel’s songwriting has always been more abstract and (way) less overtly swaggering, leaving him more room to keep the final product unique and fresh. Lucifer on the Sofa does that, and should settle in comfortably near the top of the second tier of Spoon records — an accomplished enough place on rock’s overall totem pole.