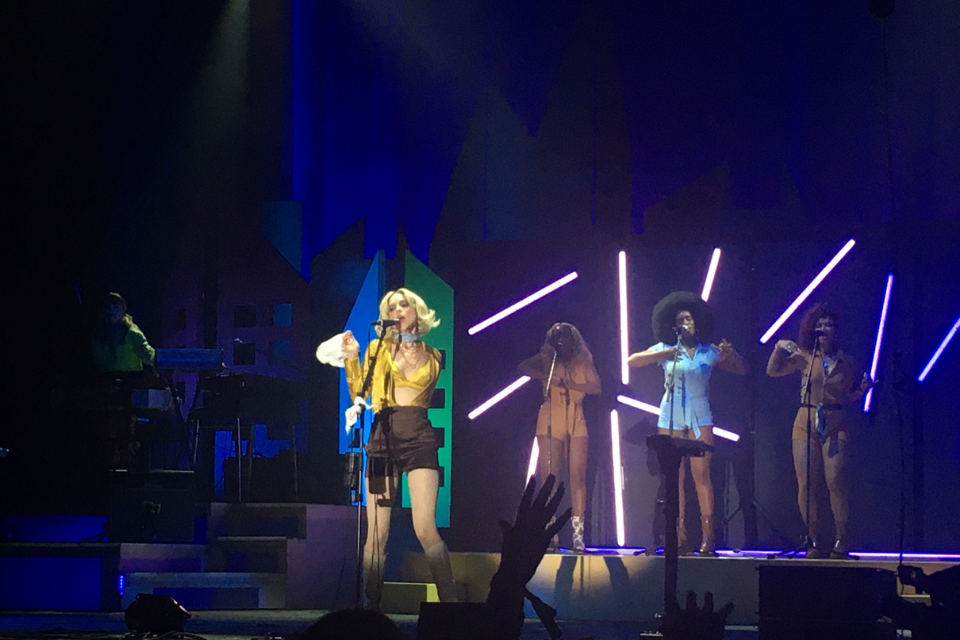 It’s no surprise that activism and anger took on a prominent role at Austin City Limits Weekend One — especially in light of a certain Texas law that recently went into effect and got an implicit, no-action signoff from the U.S. Supreme Court.

“Bans off Our Bodies” became the movement of the weekend. Billie Eilish highlighted it, and revealed she sorta considered pulling out of ACL after the courts let the abortion law stand. The ACL merch shop sold retro-, Electric Company-lookin’ “Pro Roe 1973” shirts, which seemed to be selling well judging by the number of festival goers already wearing theirs.

Before her Saturday set, Gina Chavez spent the early part of her day at the Women’s March, then showed up at Zilker to play her Liz Warren/Mitch McConnell-inspired “She Persisted.” Eilish came out hard on environmental ignorance, too (“If you don’t think global warming exists, you’re a fucking loser”). And overall — as ACL is typically quite good at doing — artists whose gender and sexual identities fall outside the straight and binary had ample platforms for both artistic and societal expression, and they ran with it.

On paper, this wasn’t the most electrifying ACL lineup, but — as I said when the lineup was announced — after the past 18 months, just about any ACL would do. And this one did. I witnessed a bunch of good performances, a few great ones, and no rain. And a few days later, I’m exhibiting no signs of a breakthrough infection. All is well.

Here are some notes and superlatives from the weekend overall and Day 3, which I haven’t covered specifically yet.

Billie’s big statements, unevenly big show
Eilish had to have had as anticipated a headliner set as anyone this weekend, especially considering two of the other headliners — Duran Duran and Tyler, the Creator — were replacements for a COVID-nervous pop legend who withdrew (Stevie Nicks) and a PR-challenged homophobe (Dababy). She put on a fine Saturday night spectacle, and as one of the biggest stars in the world, her explicit and profane rebuke of the abortion law successfully made headlines.

But to me, her 2019 nonheadlining set was actually better, owing largely to some programming choices this time around that took the air out of the place (I’m sure the very young fans beneath the front stage whose yelling and screaming was often audible on Billie’s mic would disagree). Some of Eilish’s quieter numbers just lay there, and in this setting, on this night, a number of them fell a little flat.

Even the big pro-choice advocacy moment — in which Eilish bravely raised the specter of pulling out of ACL — had a disappointing musical postscript. Oh, the callout itself was pithy:

“When they made that shit a law, I almost didn’t want to do the show, because I wanted to punish this fucking place for allowing that to happen here,” she said. “But then I remembered that it’s you guys that are the fucking victims, and you deserve everything in the world. And we need to tell them to shut the fuck up.” She then prompted middle fingers from the crowd and exclaimed, “My body, my fucking choice!”

What song did she immediately follow this big statement up with? “Lost Cause.” Whoa. What was she trying to say here, exactly? Obviously she wasn’t trying to say bodily autonomy is a lost cause, but the timing seemed like a whiff. “You ain’t nothin’ but a lost cause/And this ain’t nothin’ like it once was…” Directed at Texas? Maybe there was no connection between her statement and the next song. At any rate, “Lost Cause,” one of the standouts on her new album, was one of those performances Saturday that disappointingly just didn’t have a lot of oomph behind it. Her environmental call to action, followed by images of earthly destruction that augmented “All the Good Girls Go to Hell,” actually resonated a little more as a sociomusical (is that a word? Let it slide) collage.

None of the above is to say that her set wasn’t good, or big, because it was. And “Happier Than Ever,” the big rock power ballad that’s not like anything else she’s done to date, was a smashing closer and one of the weekend’s best moments. “Oxytocin” was red laser-and-distorted-video-augmented techno-alt fire. “Bury a Friend” was the galvanizingly dark opener and deliciously weird mission statement. It was all more than fine, even though she wasn’t the standout of the weekend.

Day three recap: Claud, a humble encapsulation
One emerging artist who’s not yet a household name — Claud — encapsulated so much of what’s happening in society right now as they performed a rescheduled, understated set Sunday afternoon on the tented Tito’s stage.

Claud Mintz, a nonbinary Chicagoan, is diminutive, 22 and looks anywhere from 14 to 16, with green, androgynous hair. Mintz’s songs are gentle, romantic and vulnerable bedroom-y indie rock, and throughout their set, there was a sense to me that the Tito’s crowd felt protective of Mintz. Hell, I felt protective of them. Was this stage (the ACL festival as a figurative “stage,” not the literal Tito’s stage) too big for this tiny, young, nonbinary person, their one bandmate, and their beatmaker?

Indie music has done an astounding job in the LGBTQ representation game in recent years, so Claud is hardly unique in that regard. But you look at Mintz, knowing what happens all too often to young people like them who dare to be themselves and look different, and you ascribe ugly events that you assume must be part of their history: bullying, trauma, all of it. You want Claud to be comfortable and in their element, like they’re doing a good job and we’re with them. The vibes at this performance encapsulated what’s happening in what I would call “good society”: Claud and others like them want equality, acceptance, and love. Those of us on their side want those things for them … but also — to be more specific about part of that — we want them to feel at home.

Fortunately, Claud’s comfort level was just fine, and they put on a solid show. The line “I’m pissed at Texas,” followed by a raging version of “That’s Mr. Bitch to You,” showed it didn’t take much to bring Mintz out of whatever shell might’ve existed in our imaginations. Mintz wore their heart about as much onstage as on record, and that was a good thing. Claud has the ability to be a hero to a lot of people.

Couple other notes from day 3: