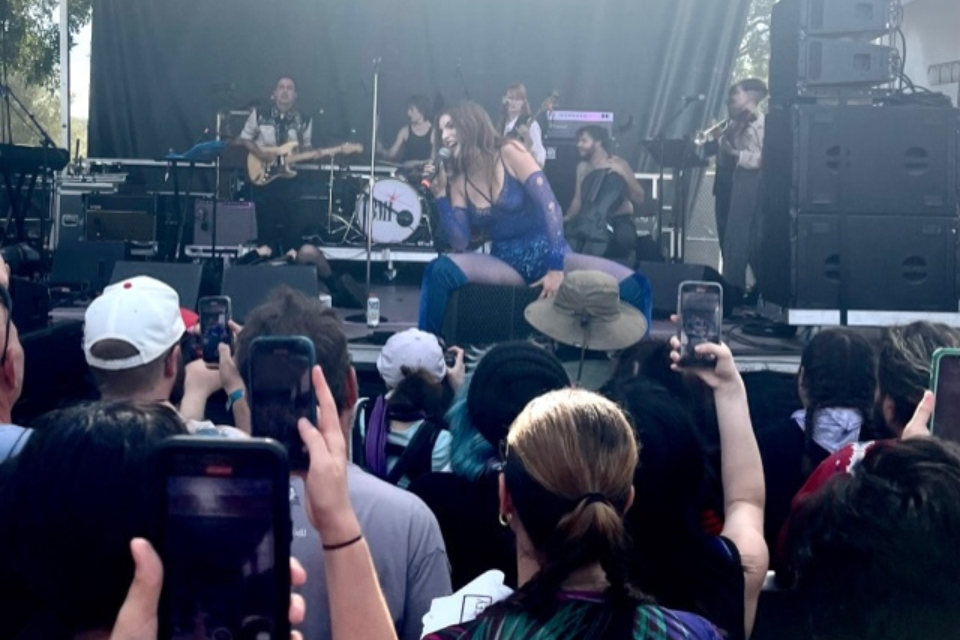 This will sound like a strange premise, but I can be strange, so stay with me for a second: Imagine that you’re blind, you fall asleep on a blanket at ACL, and you wake up having no idea what time of day it is. What if the music you woke up to was so attuned to the time of day that you’d immediately know?

Saturday night at Zilker brought that weird hypothetical to mind. Because in the evening, from Death Cab for Cutie’s 6:15 performance on, the music I witnessed matched the night — and the atmosphere — perfectly. This musical sundial might have been the greatest collective accomplishment on a fine day full of stars and superstars.

Whether in person or at home or in your car, there’s no better time to listen Death Cab’s absurdly tuneful and disarming indie-pop than in the early throes of evening and dusk (and when it’s warm, too, but of course it was warm.) Schedulers probably don’t have this exact factor in mind, but it was serendipitous; the band’s deceptively urgent drive and Ben Gibbard’s emotionally vulnerable tenor are just made for the early evening. Classics like “Crooked Teeth” and the newest Death Cab gem, “Here to Forever” had that exhale-and-take-it-in spirit.

Then came the War on Drugs, dusk-to-night music if there ever was any, and the standout performance of my day. Between noticeably perfect sound, just the right colors and management of classic rock-show lighting and the band’s Springsteen-esque indie grandeur, it proved to be incomparable. The mid-set climax began just as night fell, with a killer trifecta of “Pain,” “Red Eyes” and “I Don’t Wanna Wait,” with the second one claiming the highest of high points. The lights, stage smoke and a powerful waft of pot smoke (ironic, given the song title and artist) combined with the band’s sharp playing to make “Red Eyes” the standout.

As for Pink, Saturday’s headliner, I’ll save many of my thoughts on her show (and there are many) for my festival overview. But she is a (pop-)rock star, has her rock moves, and nightfall is absolutely the only time to witness Alecia Moore do her thing. And no matter how many times you’ve heard seen a video of, or heard about, her now-famous aerial stunt during “So What,” there’s really nothing that quite prepares you for seeing it live above your own head. The groundless somersaults she undertakes while strapped to those cables are both breathtaking and anxiety-inducing at the same time, and she manages to belt the song with incomprehensible clarity considering that predicament. Her show was comfortably a winner overall, but more on that later this week.

Sloppy Jane’s wild performance art
I didn’t specifically seek out something different as I wandered toward the BMI stage at 3:15 Saturday, but something different kinda found me. The chamber-pop outfit Sloppy Jane (top photo) — which at one time had Phoebe Bridgers on bass and is now part of her Saddest Factory label — began their show with an instrumental freakout conducted with wild gesticulations by frontwoman Haley Dahl. From there, Sloppy Jane was about 40 minutes of fascinating, off-center Phoebe-meets-Evanescence-meets-Bach-meets … uh, “Cell Block Tango”? … performance art, with the blue velvet-clad Dahl often seeming like a dedicated method actress, committed like “Succession’s” Jeremy Strong to living her role at all costs. She bellowed with a confrontational Broadway-ish bent at some points, sang with operatic beauty at other times, looked driven to insanity here and there, and crumpled to her knees and backwards onto the stage as the rest of Sloppy — fiddle, cello and much more — gave her a sonic scaffold to contemplate jumping off.

She didn’t actually stay in character, so to speak, for the duration. There were enough moments of real Haley Dahl. But for about the first 20 minutes of their set on the BMI stage — until she followed “Judy’s Bedroom” with a “What’s up?” to the crowd — it seemed like she was going to play melodrama to the hilt. During the chemically imbalanced cabaret of “Bark Like a God,” which Dahl simply introduced as, “This song’s about working in a strip club,” off came the velvet jacket and pants, striptease-style, in favor of an underlying bodysuit and hose (smart move given the weather, although the jacket went back on later). Later, in the only moment that fully recalled Sloppy Jane’s punk roots, she worked herself into the crowd to yowl the raging “Where’s My Wife.”

As if all these untrackable shifts in performance tone didn’t keep the audience on its toes, Dahl ended by indulging the crowd in a 10-second New Year’s Eve countdown, explaining that she loves the idea of having a specific time when everyone decides they will be on a better path, starting now. Aww, what a sweet, hopeful note to end on. What did I watch, exactly? Whatever it was, it was pretty damn good music and even better theater.